Wow, the One Room Challenge has really been a journey! Originally I wanted to makeover our basement into a light, bright, creative studio for blog DIYs, a creative business, who knows the future when you have a big inspiring room to play in, right? But in Week 3, the basement flooded. In Week 4, it flooded again. The basement is beyond any makeover now. Only a total tear-out can help it. So in Week 4 I moved the ORC party to a guest room two stories higher — there’s no flooding 12 feet above the ground and far from plumbing pipes!

So after switching rooms halfway through this challenge, I am sooooooo thankful we have an extra seventh week now. This has been a lesson in handling unexpected events, and thinking fast and flexibly.

I’m not spending much money on this makeover because 1.) I was not planning to  re-do the guest room, and 2.) I already own much of what I need, and whenever our basement is renovated, I want to move the studio down there per the original plans. What’s a great way to get big visual change on a lower budget? Paint! 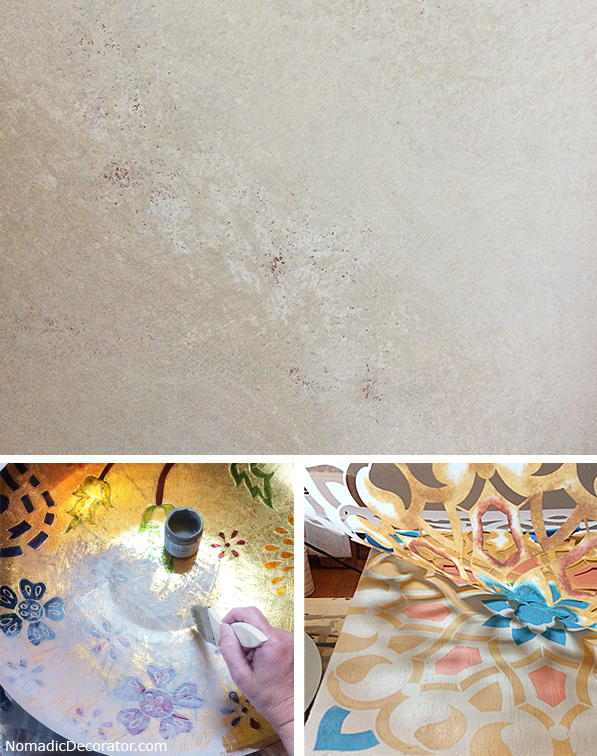 As shared last week, the guest room had dark terra cotta color walls, painted with a mottled effect to look old. I left one wall in the original terra cotta color, and painted the other walls with a similar texture to look old. I followed the steps that I shared in a previous tutorial — How to paint new walls to look old — with one big difference. Instead of using a sea sponge, this time I used a Woolie, shown here:

(Hmmmm. Sorry it’s so dark — I will re-shoot this with better light.)

The closet nook walls shown in my previous tutorial have a “small splotchy” look that I still want to fix. I think it’s hard to avoid that when using a sea sponge, even though I shared tips in that post to avoid small splotches. They still happened to my wall. The Woolie has a broad base and you can twist and turn it, pounce it, swipe it, do all sorts of big wide moves with it to make “splotchy swaths” — like big splotches instead of little ones. Here’s part of a wall I did this week. It has bigger swooping swaths of varying colors:

One recommendation in my “old wall” painting tutorial that I followed again, and it worked well again, was the advice for choosing paint colors. I recommend using two to three similar colors. Three is much better. You will get more depth on the wall. Then choose an accent color, usually a natural color like a beige or gray.

Here are the three colors that I used to make the old wall look shown above:

Then the accent color, where small areas of the color peeks through the three above colors. The walls were previously painted mostly with Benjamin Moore Audubon Russett (HC-51) and Georgian Brick (HC-50). I left small subtle patches of this terra cotta color peeking through the beige and white layers.

The ceiling is a light gray. When the walls were terra cotta, the gray wasn’t so obvious. But now that the walls are turning beige, this is emphasizing the gray in the ceiling. 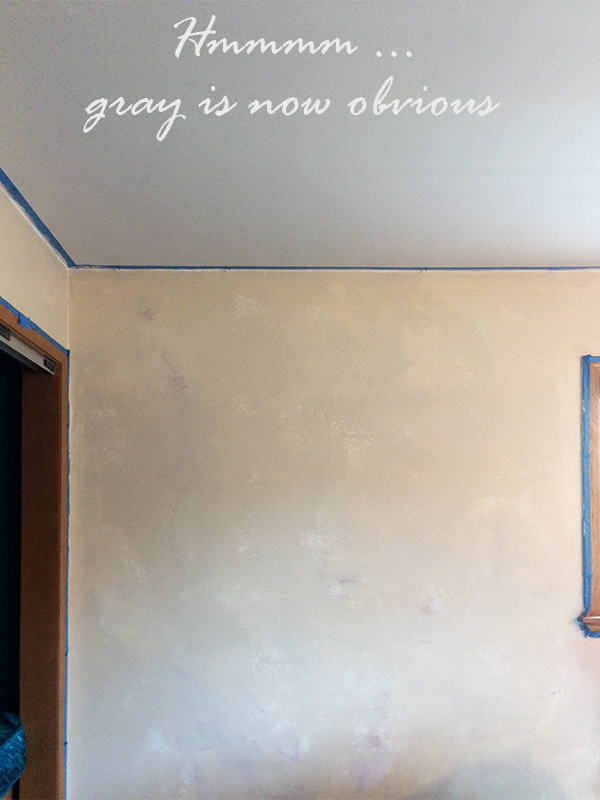 I’m not loving that. I don’t feel like repainting the ceiling. But after finishing the walls, I think I really need to paint the ceiling. There are so many other colors in the room — a teal nook in the closet, a terra cotta accent wall. Gray on the ceiling adds yet another color. I will likely paint over the gray with Benjamin Moore Maritime White, so I’m pulling a color from the wall up onto the ceiling. Also, the white color will be lighter and help bounce light around more, which I like.

How Much Paint to Get

Now, I just suggested buying numerous paint colors. But that doesn’t mean that this is going to cost a lot. As you’ll see below, you are not applying full even coats of paint. So you will use less paint. I used a surprisingly little amount of paint, far less than I expected.

As a benchmark, here is what I used for “two and a half” walls in a room that’s about 10 x 10 feet, with walls that are 8 feet high. I say “two and a half” walls because I left one wall alone with its previous color, and there is a closet and door on another wall, plus two smaller windows. So I painted about 200 square feet. I used:

Yeah, that’s it! I even bought a quart of Maritime White, thinking for sure I’d run out of a pint. I didn’t. As you’ll see below, you are applying light layers and leaving lots of holes showing the layers below, so you will use a lot less paint. Also, rollers suck up a lot of paint. I would have used a lot less Simply White if I had sponged that on the wall instead of rolled it.

Here’s how it went down. Or, how the paint went on!

The first layer, Benjamin Moore Simply White, was painted terribly! On purpose. I loaded a roller and haphazardly rolled the paint in different directions on the walls. It looked awful, really awful! 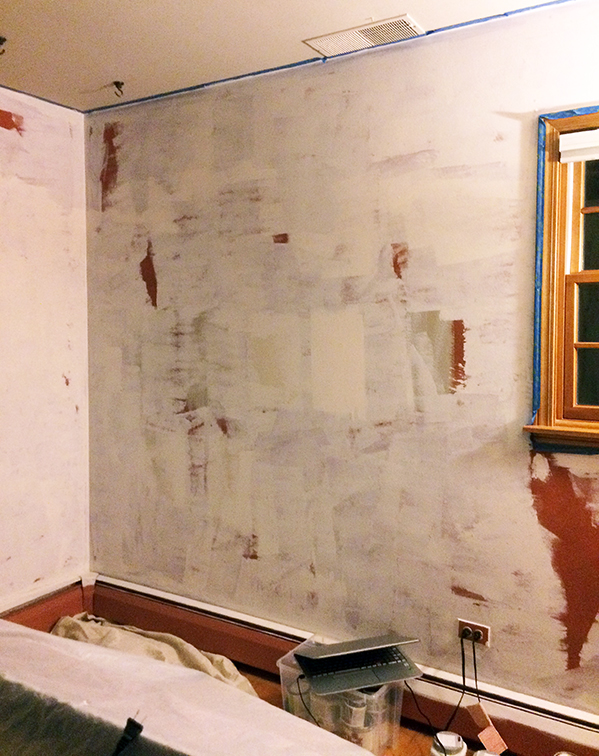 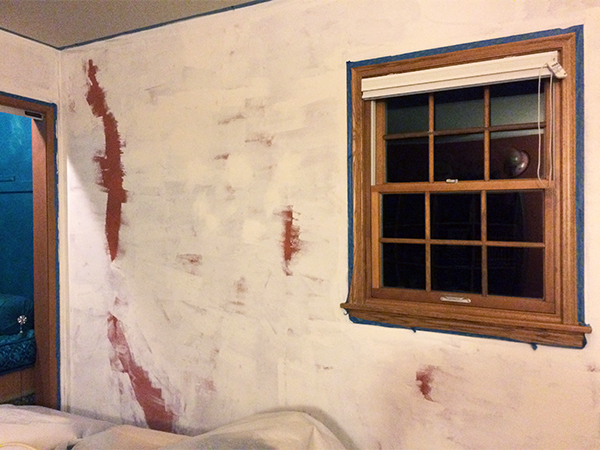 But don’t worry. This is how it’s supposed to look. The purpose of this layer of paint was to cover most of the terra cotta color, and to not leave a perfect finish. Old walls are imperfect, right?

After painting for years, I trust the process and know it will turn out okay. Though this week wasn’t without its worrisome moments. As you’ll see in a minute.

The second layer, Sherwin Williams Bungalow Beige, was applied to the walls with the Woolie. I pounced the Woolie on the wall, swished it, swooped it,  twisted it, turned it. Anything to make a random effect. You don’t want to see any repetitive patterns. I was aiming for a natural weathering look on the walls. So to achieve this, you want to make wider swaths with the Woolie. Leave areas of the colors below peeking through.

Here’s how it looked after this second layer: 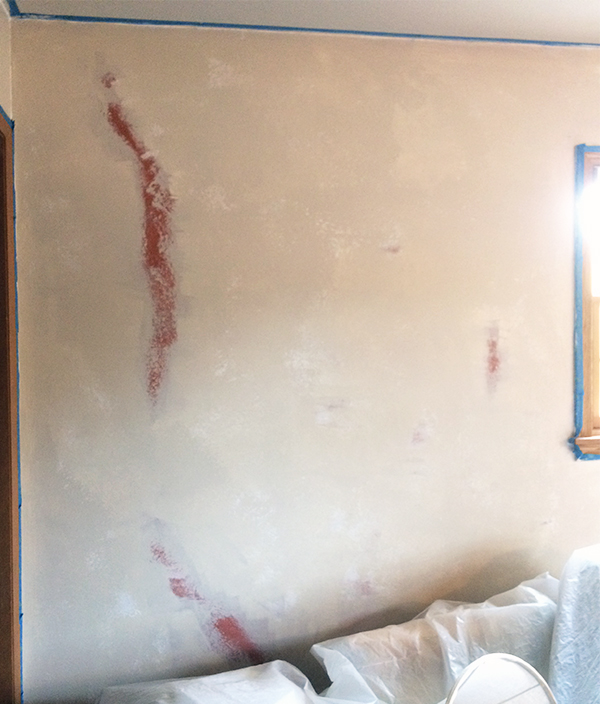 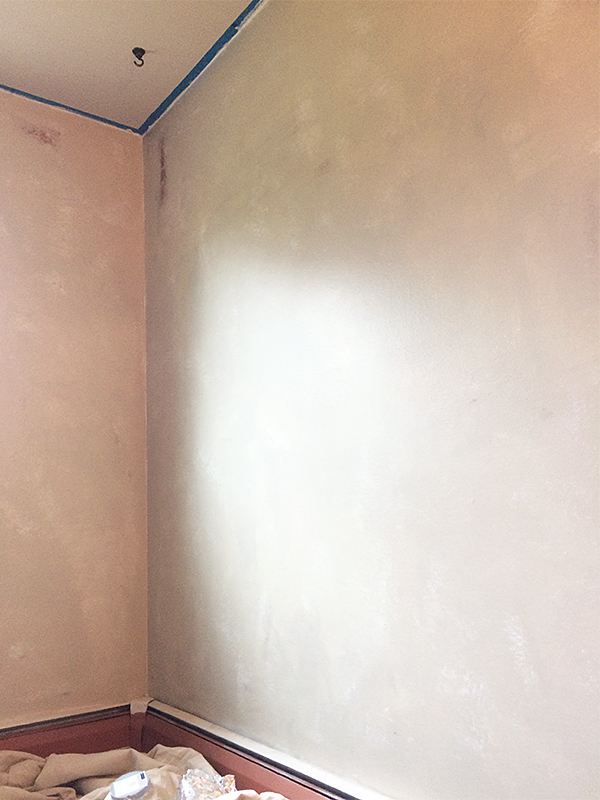 I was painting this Bungalow Beige layer late at night. The next morning I took a look at the room. My heart sank. It felt so … blaahhhhhhhhhhhh. Like it was a FEELING. A feeling of sadness. Hopelessness. Loneliness. This is how the room FELT! It FELT like a single lonely piece of plain beige paper, all wadded up and discarded in the middle of a room with beige floors, beige walls, beige ceiling. Just so much beige-ness.

I had a moment of uncertainty. But just a moment. This is to be expected!! I just erased a rich deep color and replaced it with, yeah, blahhhhh.

One solution is to TRUST. Trust the process, and keep going. To avoid this blah-ness, a third layer of paint is necessary. The third layer adds more dimension.

When I put swatches on the wall a few weeks ago, some colors looked flat, but the Benjamin Moore Maritime White was really singing in this particular room and in its light, during both day and night. Like I was really loving it. So I saved it for the last paint layer, the most obvious paint layer.

The third layer, Benjamin Moore Maritime White, was also applied with the Woolie, just like the second layer. I paid attention to how much of the first and second layers I wanted to peek through. And also, I was careful about how much of the original terra cotta to leave peeking through.

I felt MUCH better after adding the Maritime White onto the walls! Instead of wondering if I’d made a big boring mistake, the walls are coming more alive, and sophisticated, with the addition of this third layer. 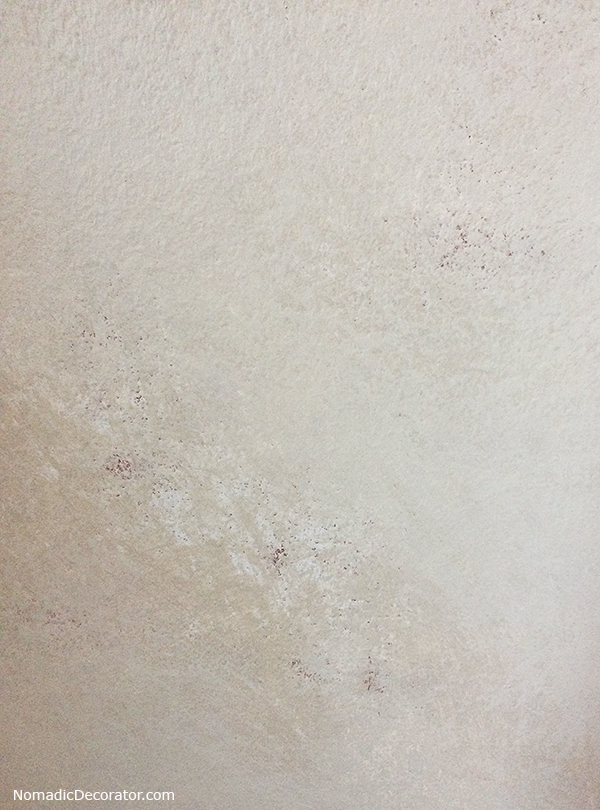 The accent color, Benjamin Moore Audubon Russett, in the end wound up being far more subtle than the original plan. I originally left larger “rivers” and random spots of the terra cotta color: 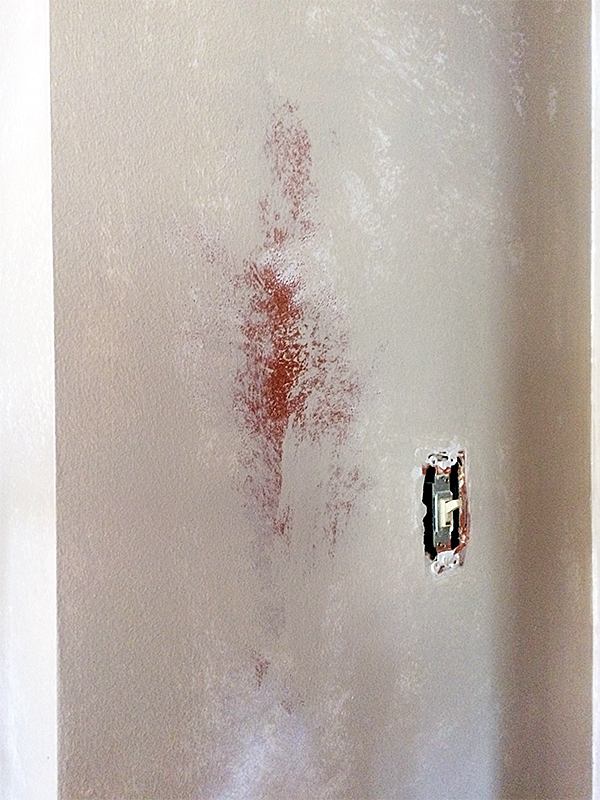 But, the next day, as I looked around the room, my eye kept getting caught on those terra cotta blotches. And I realized, I don’t think that’s what I want to be looking at. It’s too much. Plus, I was envisioning the final result, all the other things that will be coming into the room — the textiles, the patterns, the textures. This gives you an idea of the things that will be in the room: 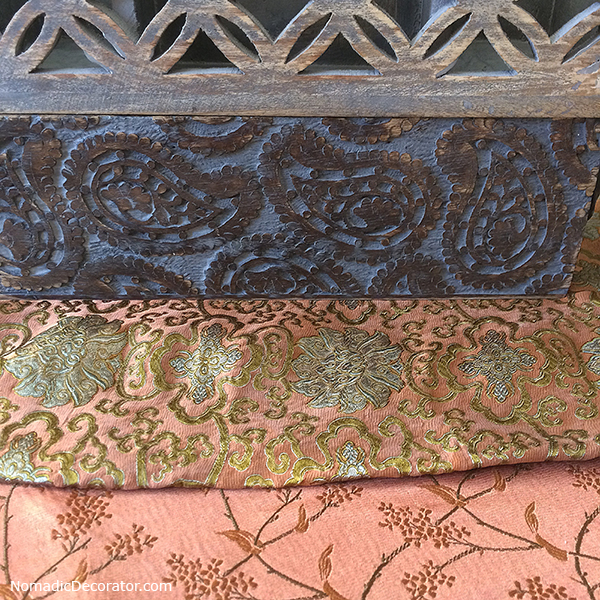 The big terra cotta rivers and blotches on the wall will compete too much with these things. The other factor is, this room is smaller, about 10 x 10 feet. If it was a huge room, maybe the walls could have handled more “stuff” happening on them. In this room, I decided it was “trying too hard.”

So I painted over much of the terra cotta. I left subtle areas that you can see in person. But they don’t photograph well, so it’s hard to see online. I should note, what you see in the next photo is not the final wall — this is after the second layer of paint. The third layer evened the splotches out on this wall a lot more: 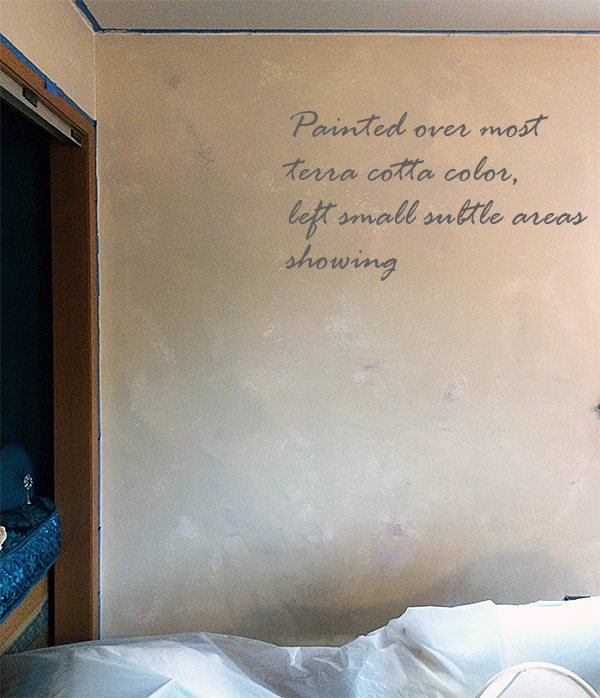 After getting through these steps, I am starting to feel excited about the walls and how they’ll “play” with the other things coming into the room!

Speaking of the Other Things …

I started painting other pieces too. I’ll share more in future weeks. For now, here’s a peek at a little Moroccan table that will be a step stool to get up into the Moroccan-Indian closet nook: 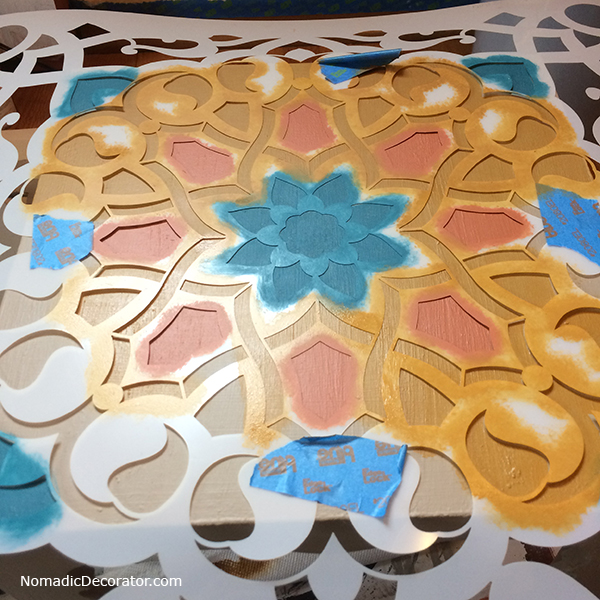 And I started painting trays that will be stenciled to look like baskets from Africa, like the one shown here with the trays: 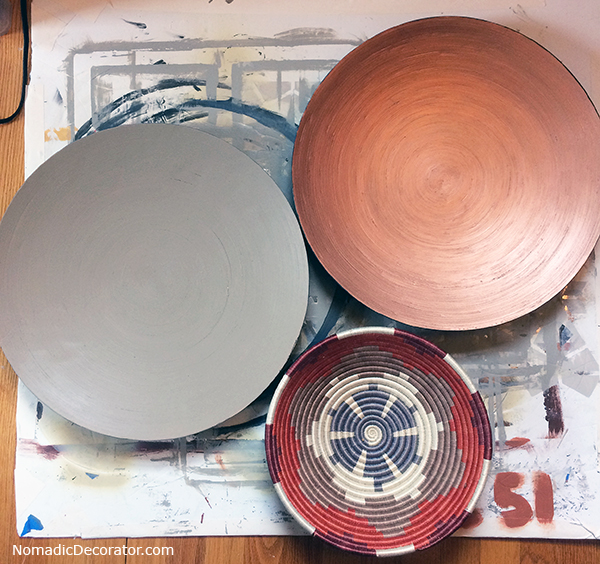 I started painting over a bowl that no longer fits my style. It will be painted with varying colors of Chalk Paint, then dry-brushed with metallic copper to catch on the raised edges of the flower pattern: 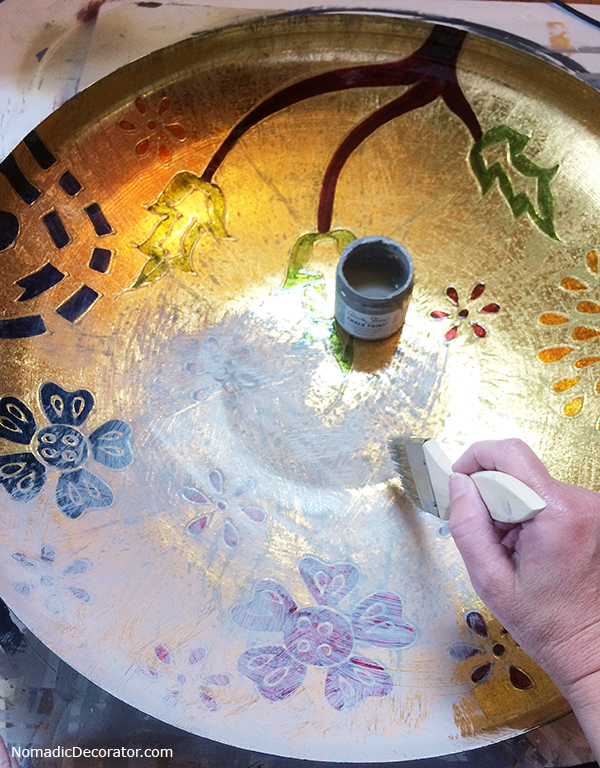 There is still a LOT to do … I’ll stop now and get back to work!

But first, visit the other bloggers who are doing the One Room Challenge. There are 20 featured designers and about 200 guest participants who are making over rooms. As the end gets closer, I’m seeing color concepts come together, accessories meeting furniture, walls and floors transformed, and innovative DIYs. Go see what they’re doing!

6 Replies to “One Room Challenge Week 5: How to Paint an “Old Wall” Look”