a blogger needed a faucet that would go with a copper sink. She needed the faucet by the end of a certain weekend. Because by the time the clock struck midnight that Sunday, a guest would be at her house, and then after that her husband would go to Minneapolis for business, then after that he would go to Miami for business, then after that he would go back to India for  business and to supervise a kitchen installation. And for that last trip, there’s gotta be a faucet in the suitcase. Little boys and girls, you don’t have to live this way if you don’t want to. Apparently these people are crazy-nutso. And they do get tired.

So the blogger and her husband found the Cucina Vivaldi faucet in San Marco Bronze before the chariot turned into a pumpkin: 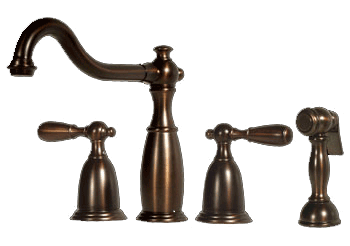 This pretty faucet will be paired with a hand-hammered copper sink that some nice people are making for the blogger and her husband, and are shipping from New Delhi to Chennai in time for the kitchen installation. These nice people manufacture many copper sinks sent to the U.S., so the sink is a great price when you get it from the source. Please know that the blogger and her husband did not choose this Cucina brand because they’re creating a Tuscan style kitchen!! They are not that goofy. Sometimes things just turn out that way by serendipity.

So the blogger and her husband went to Studio 41 in Highland Park, Illinois which is in Chicagoland, because they were customers there once before.  They found Studio 41 has great selection and service. They strolled together through the displays, and they found a few kitchen faucets they liked. But the blogger knows the brands and she knows the prices — you learn things like this through experience and don’t even have to ask after awhile. It all made her feel queasy. She was in the mood for a bargain. So she wasn’t sure if she would find The Chosen Faucet to Go to India here. You may wonder, why didn’t the blogger take her husband to Home Depot for a faucet on sale? Well, because they needed to talk with salespeople who know their stuff to be sure the faucet would work with what the India plumber told them to get. They needed a bit of hand-holding. No that’s not like boyfriend-girlfriend hand-holding, it’s a figure of speech. What’s a figure of speech? Ummmmmm … you know, like when you say something that sounds like what it is, but it’s really not. ??? Sorry, I’m confusing you. Let’s get back to the story.

So then the blogger and her husband noticed an “Outlet” sign. Hmmm. What’s over there? Great deals, that’s what was over there. After digging through a few boxes, they found the most perfect faucet — it’s what they were looking for all along and at a fantastic price. Actually it wasn’t 100% what the blogger was looking for, but sometimes you can’t get everything exactly the way you want it, and you compromise because some parts of what you found are really good, and so you decide to be very happy with what you found. That’s what you do if you’d rather live in la-la land than blah-blah land or wah-wah land. And the blogger likes to be an annoying Pollyanna that way.

At this point, the blogger and her husband are in the mood for quality things at fantastic prices, as they believe such a thing is possible when you both work at it and get a bit lucky. India is not the bargain-land they thought it would be. They are swimming against the tide with their style preferences. They are going for a country look in a sea of contemporary. So their choices are few. Imagine the inefficiencies of everything in a different land — traffic, distribution channels, communication — while looking for a design needle in a haystack. It’s not easy. No, not at all.

But what really pushed them to start buying more items in the U.S. and hauling them via suitcases to India is the risk of buying from retailers in India. The blogger’s husband ordered some kitchen backsplash tiles with yellow/orange in the accent tiles, because he saw them at the store last October and liked them. But when the tiles were delivered, they were pink! But the blogger’s husband was back in the U.S. when the tiles were delivered, and no one working in the house ever looked at the tiles. No one knew pink tiles were piled in the house. Once the husband went back to India months later, he found that the retailer believes that the fact that the color is different is not an issue. The design is the same, so it’s the same tile. But, it’s pink, the husband sputtered. That’s not the same tile. Yes, it is, the retailer says. They don’t want to take the tiles back. And oh, that’s just one example of the problems. They also have an extra toilet. A retailer sent a toilet that won’t work to the contractor, and won’t take the toilet back. Maybe the design blogger and her husband could turn the extra toilet into a planter on the terrace? What would you do with an extra toilet? They need the equivalent of Craig’s List in Chennai to get rid of this stuff! Does anyone know if that exists in Chennai-land? There have been other losses due to various things. This all adds up — not just financial loss, but stress, headaches, and constant debating with people are all costs too.

So you may think there would be risks to hauling a faucet from the U.S. to install in a kitchen all the way on the other side of the planet. That’s true, it may not work. But the plumber in India-land said that as long as the blogger and her husband get something compatible with a 1/2″ thread, it will work. And so that’s what they got. And as good consumers, they also asked Studio 41 about the return policy for outlet items. Due to the circumstances, the nice people at Studio 41 put a note in their customer file. If the faucet is incompatible, they will still be able to return it as long as it wasn’t installed. Yay! Plus, the blogger and her husband wouldn’t have found this faucet on such deep discount in India. They would have had to pay top dollar. Or, in India-land, top rupees.

We hope there is a happy ending to this story.

(Once Upon a Time image from Elegant Word Art.)

One Reply to “A Faucet Goes to India”