It’s not just pigeons that bring messages. Owls can too. We know they are wise.

Three of us were in the Chennai apartment debating about ceiling fans (referred to briefly in the previous post) and perhaps we needed a break. We got it, delivered by a loud cardboard crash.

We found an owl on the living room floor, sitting next to a dust-covered box, now etched with the outline of crashed wings. I approached, crouching and asking “are you OK?” Like it’s going to answer.

The owl eyed me while I eyed its wings and legs from a respectful distance, looking for anything askew. My mind whirred. I’ve heard owls at night during our Chicago summers. I’ve seen them in photos and on TV. But never in person, right here. This guy is much bigger than parakeets we’ve had. What if it’s hurt? That beak looks sharp. I spot a towel nearby, to throw over the owl if needed. Can I grab it? Then what do I do with it? What do I put it in? Would I hurt it more while trying to help it?

Where we live near Chicago, there’s a wildlife rehabilitation center in Barrington. We’d go there, and they’d know what to do. Who knows what to do with owls in Chennai? All this, whizzing around my mind within seconds.

The owl probably had its own mind-whizzing going on in whatever way it understands. It decided to flap around the apartment, which feels big enough until a bird with long extended wings starts banging around everywhere … so fast … one wall here, one wall there, crashing into the ceiling … oh gosh, don’t hurt yourself!

We’re now running around, flapping our arms, everyone and everything flapping. I run to a big balcony door and open it, showing the owl, talking to the owl, here …  here … here’s how you get out. Now it sat atop the kitchen cabinets, resting. 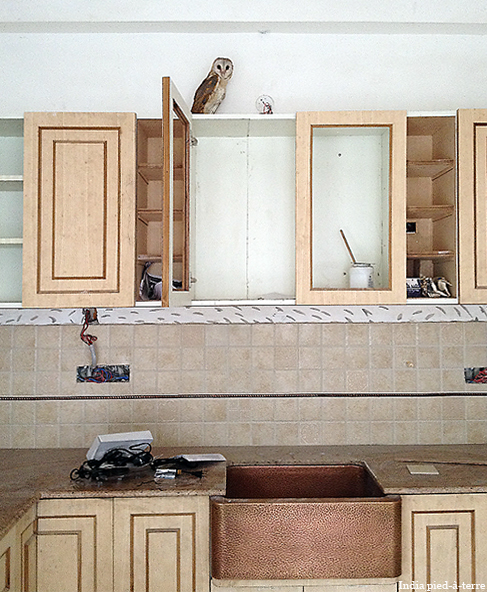 We had a moment to let the situation soak in:

There’s an owl in the apartment and now we feel really responsible for it.

The owl knows how to take care of itself though. Once it had a chance to survey its surroundings and its options, it flew gracefully and purposefully across the place to an open window. Relief flew over us as it took flight back into the open air where it belongs. Relief was very short-lived though. As you see in this video … ravens awaited … you can see them circling, circling:

We hadn’t noticed so many ravens until they flew after the owl. Watching carefully, you can see them fly off to the upper left. Now I felt sick. We don’t know what happened, but my husband thinks far off in the distance, he saw the owl out-fly the predators. My husband is a very optimistic person. More optimistic than me.

Later downstairs, Amma said it’s a good omen to be visited by an owl, and good things will happen. The timing was full of serendipities — this was the first day both of us were in the India apartment together, having flown halfway around the world to see it after 18 months of construction. It was also the one-year anniversary of my husband’s grandmother’s death. For Hindus this could certainly bring wonderings about the young owl’s intentions.

We heard later that our nephew saw the owl being chased by ravens, and it flew through his second-floor porch, but not through his open apartment door. The owl then avoided another open apartment door below us, and went out of its way to fly up around the staircase, around a corner, and through our open door. It was not the flight path of least resistance. At the time our nephew thought the owl, despite being chased by ravens, was specifically aiming for our apartment.

We wanted to believe our visitor was a good omen. But what did the presence of the ravens bring? What did that mean? If you’re going to be superstitious, you can’t be selectively superstitious only in your favor. This weighed on us. Ultimately, while thinking about what it all meant, my husband got some insight into business troubles he was having. Literally, he felt ravens were picking away at his business. He now saw with clarity that he needed to shake the ravens off, that they weren’t going to change. They are what they are. In the months since, he’s made moves to shake the ravens and get his business into more of a safe haven, under one roof. It’s led him in the right direction. See what wisdom owls can bring …