In last Tuesday’s post, the photo was about an owl. But I realize the owl filled maybe 2% of the photo and the rest was … a kitchen, a kitchen in the India apartment:

And I realized I’ve never shown much here after 1 1/2 years of blathering about the apartment, dining table and chair inspiration, Tuscan kitchens, farmhouse sinks, faucets and copper things, and blah blah blah. Not to mention buying a lot of stuff at HomeGoods. Meanwhile things have been happening for real in the apartment.

To come clean, keeping secrets about the state of things has been kind of intentional. Why?

I don’t have pretty photos to share. Don’t we all want our photos to be pretty?

While I was in Chennai, the kitchen progress didn’t reach a photo-worthy stage. The kitchen mostly looked like this: 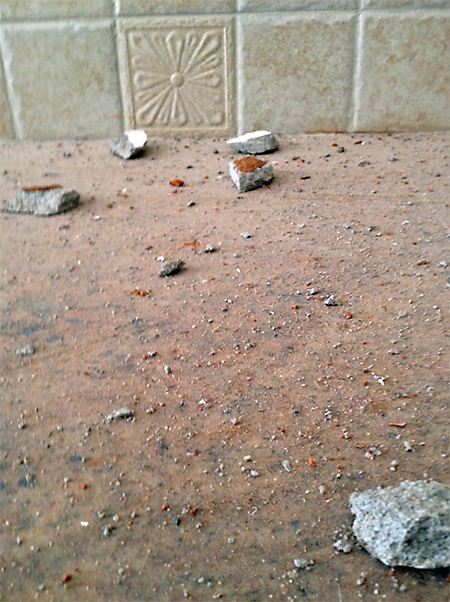 I had arrived bright-eyed and hopeful that we’d cook dinners there within a few days. People had been working in the kitchen for six months so we’re in the final home stretch, right? Ha ha HA. After three weeks, my expectations shrank to hoping for a 2′ x 2′ section of countertop where I could do a staged close-up: yellow Tuscan cannisters from Sur La Table lined up on the granite, next to the copper farmhouse sink and the bronze faucet, beige and copper tile backsplash in the background, a few spice bottles and the edge of a colorful French jacquard dish towel for accents … all giving the illusion that the whole kitchen was nice beyond the confines of the photo. But we didn’t even get to 2′ x 2′ of completed and clean kitchen!

The last time I saw the kitchen, a few men were standing on counters, spraying noxious fumes to “finish” the cabinets, and other men were on the floor sanding a wood strip that we wound up scrapping.

So knowing that, here is what I have to share for now … 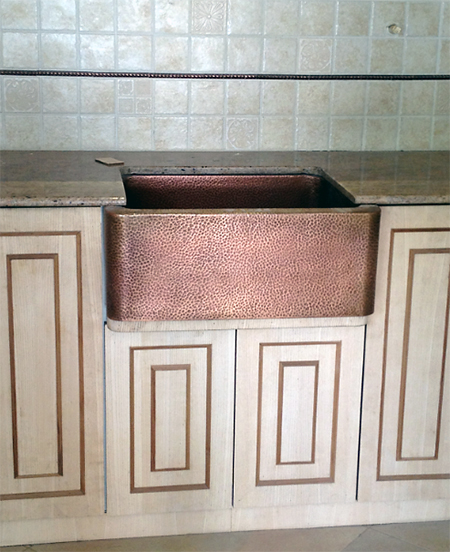 You can get many styles of copper farmhouse sinks from places like Copper Sinks Online, but ours was custom-made to size in Delhi by a company that manufactures copper sinks for U.S. retailers. We wanted to eliminate the expense of shipping from the U.S. to India. Our crew had never seen a farmhouse sink before! We had to play YouTube videos of farmhouse sink installations for them. We assured them the installation would be secure. But can you see that wood platform under the sink? Our carpenter did not agree that our instructions would hold the sink (this from the guy who had never seen a farmhouse sink before) so after my husband left India, the carpenter added that platform contraption underneath the sink. It’s too late to remove it now. Oh well. We could probably stand in that sink and it won’t move anywhere now.

Our carpenter built all the cabinets on-site. The granite and most tile was sourced in Chennai. We found backsplash accent tiles at Home Depot that we hauled over in a suitcase — tiles that we found for a penny when a lucky rainbow led to Home Depot, true story! 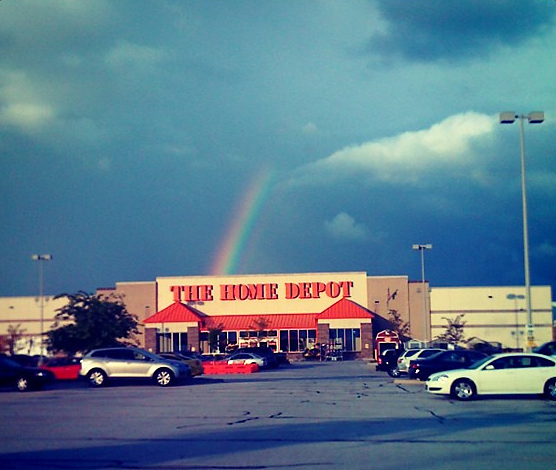 These are the tiles from Chennai and Home Depot, plus the faucet from Studio 41, when my husband and nephew shopped for granite. You can see a strip of “braided” accent tile from Home Depot that’s shiny copper to tie in with the copper farmhouse sink: 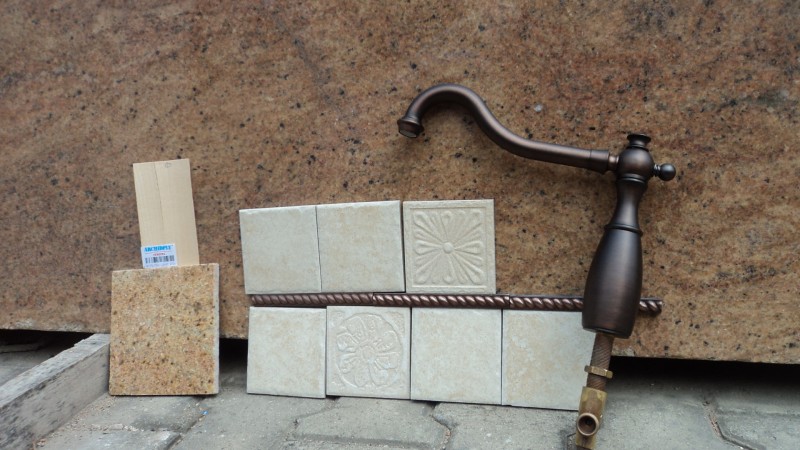 Here’s a shot of tiles installed in the kitchen. But, do you notice something: 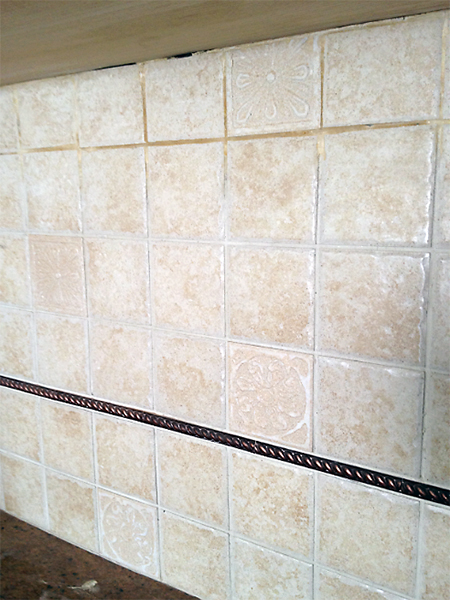 That top row there. Lookin’ a little different. While we were in Chennai, we were on-site supervising every move. Then we left for three days to shop for furnishings in Cochin antique shops. During that time, they brought someone in to finish the tile, to lay out the top row which had been missing. And … ugh … no words needed. I think what happened is, terra cotta dust was everywhere from electricians drilling into the plaster and brick walls. Maybe the tile guy got his fingers covered with terra cotta dust, then used his fingers to smooth grout. Which he shouldn’t have used fingers for that, as the grout texture is obviously smushed like he did. Our architect was dismayed and agreed this would be ripped out and re-done. What was this tile guy thinking?!? No lucky rainbow for us the day he was working in the kitchen, huh?

So this is how it is, three steps forward, one step backward. Eventually we will get it done and there will be pretty pictures to share.