Twenty years ago I was a young girl from the Detroit suburbs who knew Hudson’s, JC Penney and Sears from our local mall. I hadn’t yet traveled west of the Mississippi, nor set foot in another country other than Canada just a hop away from Detroit. Then I went to Albuquerque for a conference.

I had never seen anything around Detroit as old as petroglyphs. These petroglyphs are on a pin I found at a shop in Old Town. 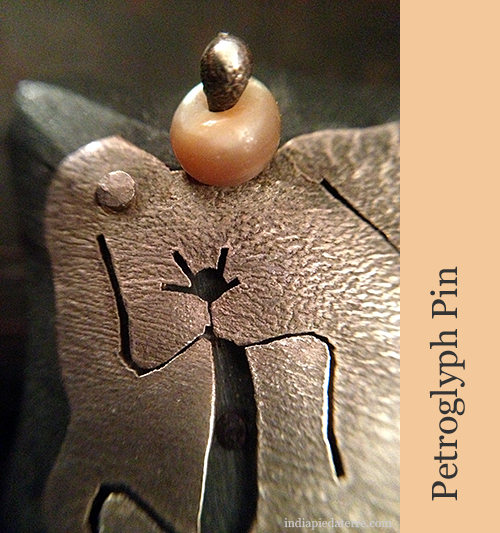 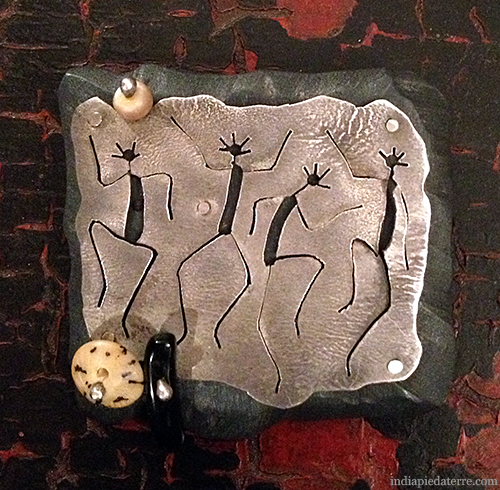 I met a worldly bear, face to face. 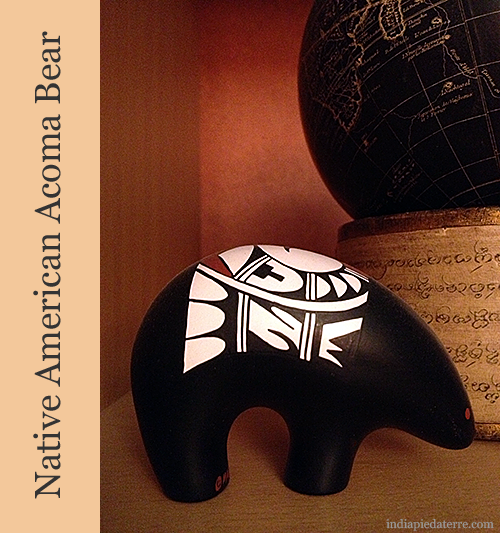 I found mesmerizing Acoma pottery. Bought the biggest I could afford then and still pay my rent (yes it’s tiny, ha!). 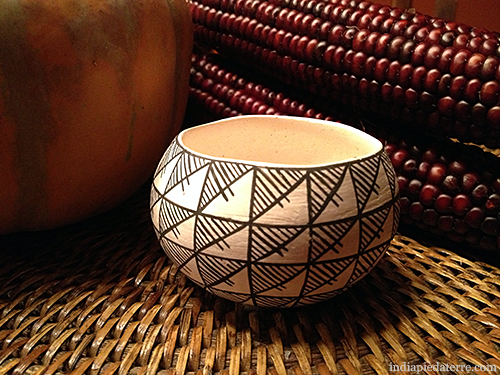 Then I drove to Santa Fe. Some things seen there have never left …

There were exotic things at Seret and Sons from Middle Eastern and Asian lands that were straight out of 8th grade Social Studies and seemed so not possible to ever visit (at that time – but yes it is possible, make it so!). I saw Aboriginal art on Canyon Road. I saw a world of curved adobe so different from the boxy brick homes I’d always known.

There, I traded the gray fitted pencil skirt and pumps worn at the conference, for a long flowing silk circle skirt. And strappy sandals with ankle ties (still have both).

It was freer, but felt more fitting.

I’ve been called back to Santa Fe many times since. We once rented a house there for a photo shoot for a little catalog we ran for awhile. We captured the wooden beams, the adobe fireplace, the whole look n’ feel. Planning the photo shoot in Santa Fe inspired me to choose more organic shape candles and natural materials. I wish I could shrink and live in the pages of that catalog (we sold candles): 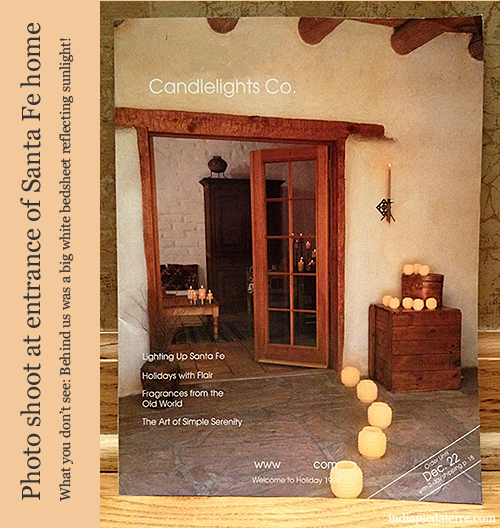 Sorry I deleted the whole company name from the cover — that business was my baby and I still have emotional ties to the name. This is so selfish, I know, but I don’t want anyone else to get the idea use the same company name now! 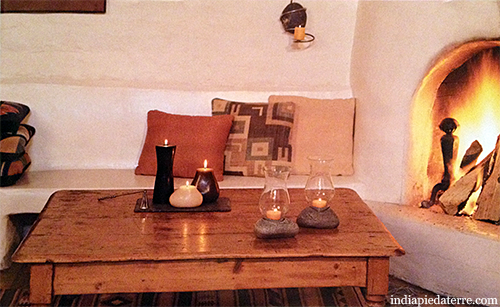 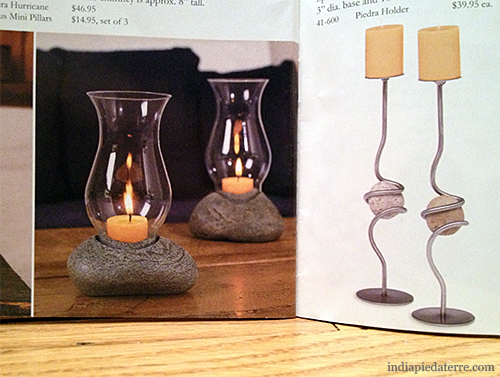 These candles were wrapped with embossed tin and we found a similar tin embossed mirror at the photo shoot home. 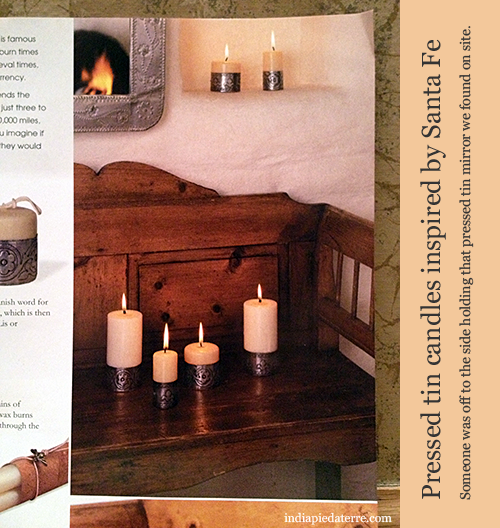 The whole house smelled so good after shooting this aromatherapy bath! 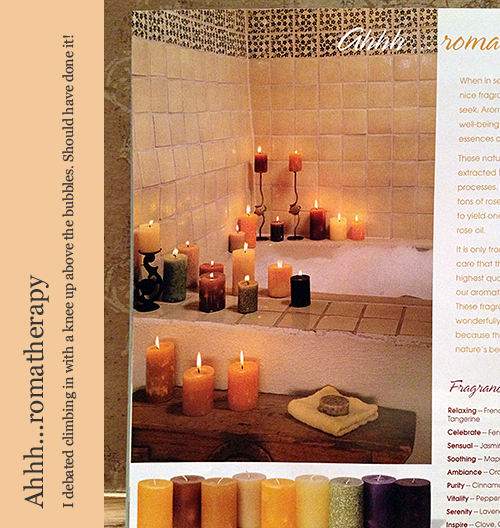 I believe these were Illume candles, which are now very popular. Great fragrances – pomegranate is my favorite! 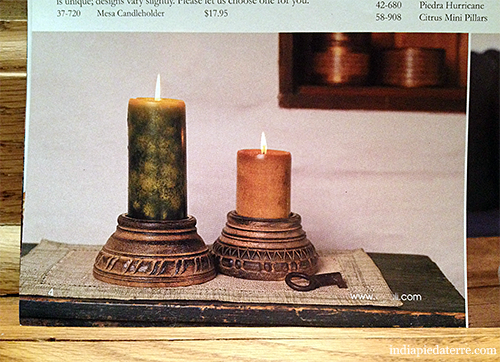 These were mint and citrus candles – the most natural fresh candle fragrances I’d ever found – and they were featured with Moroccan mint tea glasses. 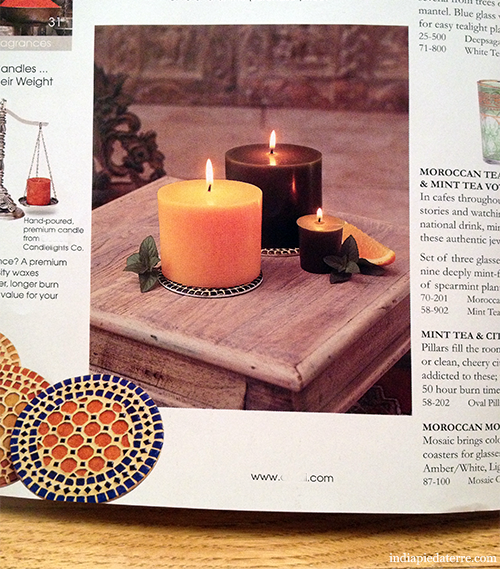 The discovery of the things that exist in Santa Fe at Seret & Sons so many years ago has never left. I had never seen such things before then. After that, my taste gravitated away from stark black and white, and toward a more colorful worldly look that lasts today.

We have an old Indian carved window surround from Seret & Sons that hangs in our home: 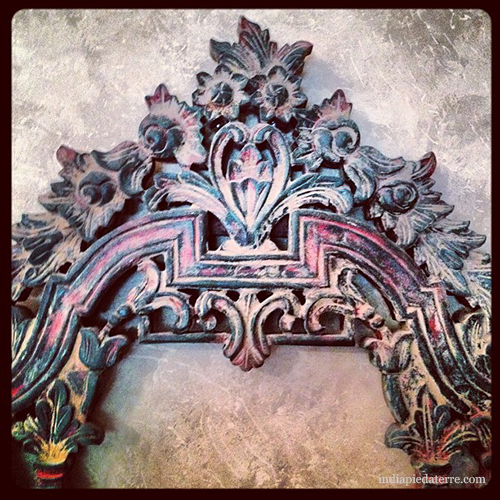 We also have a door from Seret & Sons that makes an appearance in this scene from our former catalog: 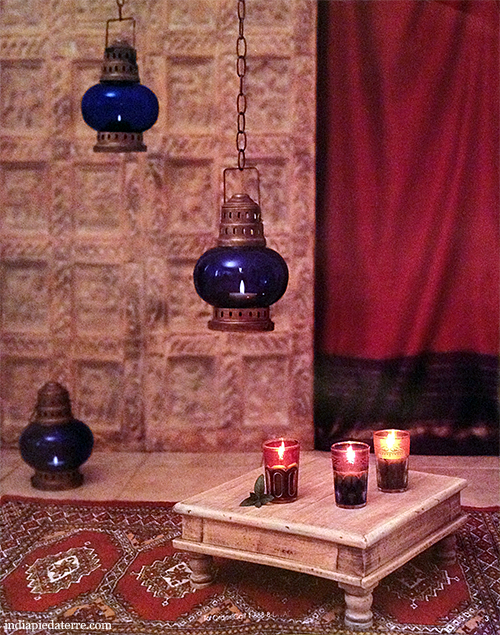 And in this scene for the bangle and necklace bar DIY I recently posted: 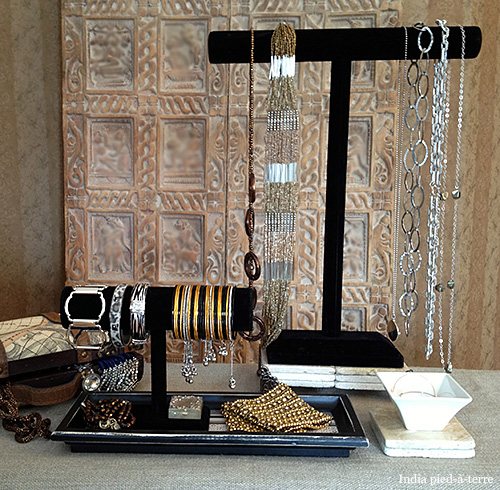 The door is very blurred because images on the door are, um, NSFW — they’re scenes from the kama sutra, carved in wood!

We’ll be in Santa Fe again soon. I wonder what we will see this time that will inspire? Soon we will know.