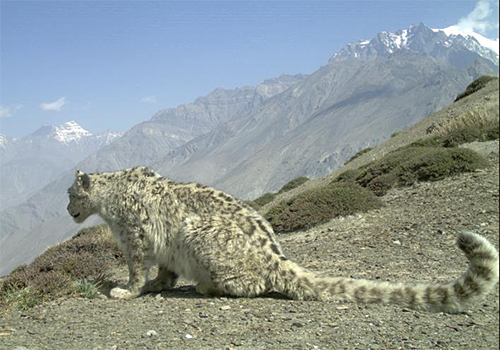 As you can see, this color helps them blend in their snowy, rocky habitat – the Himalaya and other mountain ranges in India and Central Asia. I saw my first snow leopard in the Himalayan foothills in Sikkim in Northern India years ago. No, not wandering in the wild – snow leopards are very elusive and not often seen by humans. That snow leopard was in the Gangtok, Sikkim zoo, lounging around in an evergreen forest on a mountainside, a short drive from the Tibetan border.

The Snow Leopard Trust is an organization that lets you get up close and personal with snow leopards, and even though it’s through a computer screen, you feel the big cats are looking right at you. The above photo is from their website and they have many more “glamour shots” of snow leopards, pretty much acting a lot like big housecats: 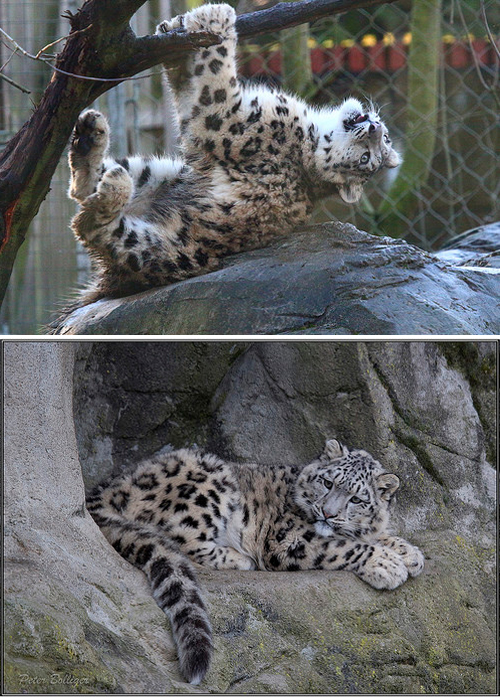 The coolest thing is you can see galleries of snow leopards living in India, Pakistan and Mongolia that triggered motion detection cameras. They walk in front of the camera and trigger their own snow leopard selfie! 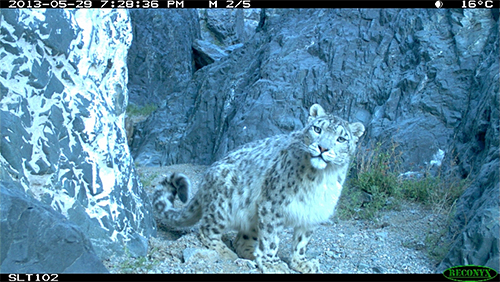 The Snow Leopard Trust has followed 19 snow leopards for years in Mongolia and you can follow their stories – they’re like soap operas full of romantic entanglements, moms hunting for their babies’ survival, fights for territories, banishment and travels to far-off lands. These leopards live full lives!

These gorgeous cats are endangered, and the Snow Leopard Trust is working to save them across the 12 countries where they live.

Sometimes, the cats come down from the mountains and kill livestock as food. The farmers retaliate by killing the snow leopard. The farmers live on only a few dollars a day and losing livestock is tough for them, so you can kind of understand why they do what they do. The Snow Leopard Trust works in several ways to prevent the farmers from killing snow leopards. One way is to give an income to people living in snow leopard country, who help to protect the cats. They work with the families to make products for sale. Right now there are some gorgeous color yarns for sale. 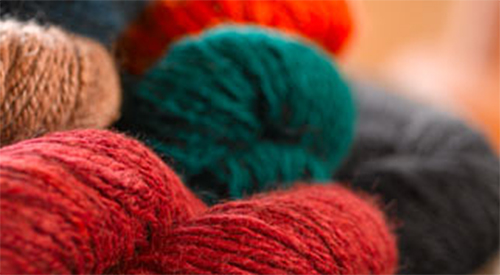 I ordered some yarn in storm (teal blue), spice and desert colors.

The yarn is 100% camel wool. It’s made by families in Mongolia from the wool of two-humped camels – the same kind of camels that were used centuries ago to carry silks and other goods from China along the Silk Road. Here’s a story that tells you how these yarns help the families that spin the yarn, and in turn helps the snow leopards to survive.

I’m going to knit a pillow cover, with some beads mixed in and maybe some silken threads to glam it up! I’ll be soon turning an extra closet in our house into a sitting nook, and this pillow will be going in it. Every time I snuggle with the pillow, I will remember the snow leopards …