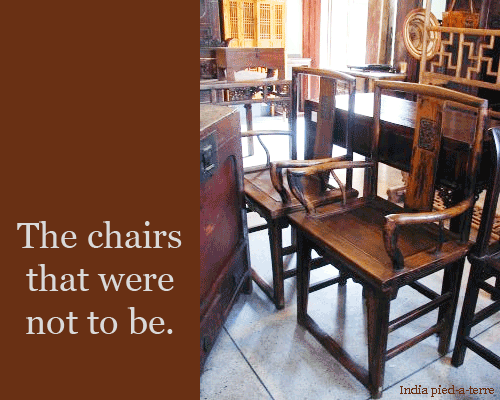 They were spotted as we rounded a corner in Baan Tawai, Thailand, a crafts and furniture-making village south of Chiang Mai. I was driving, and driving on the “wrong side of the road” for an American so it took all my mental resources to not crash into anything. So my husband was the spotter. And he spotted these chairs in a showroom open to the street. “STOP!” he yells. “SCREECH!” I almost went. But no, I was already driving really slow because you have to drive super slow in those skinny gravelly road lanes. We glided into the nearest parking spot (also skinny gravelly spot) and ran to claim the Chinese chairs – the very Chinese chairs that were on our short list of “things to find.” We had been driving out of Baan Tawai for the last time before heading to the Chiang Mai airport. The chairs would cost a heckuva lot more back in the States, so we were happy to score a great look cheap-cheap-cheap.

The chairs would have made a marriage made in design heaven with our dining room table. Our table is a six-seater with only four chairs. We thought two of these Chinese chairs (repro not antique) would be perfect at the ends of the dining table, finally making six seats. 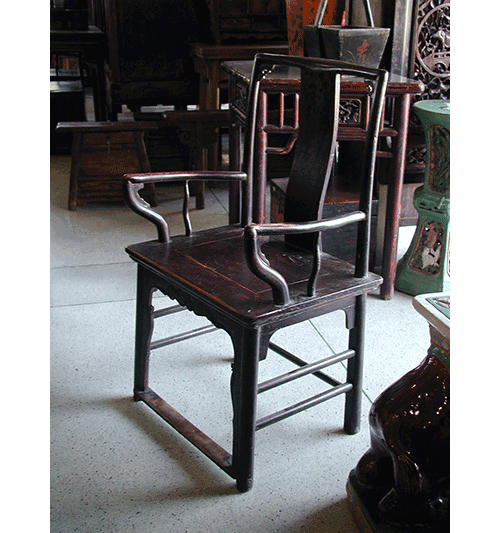 The patina and color on the chairs was perfect.

We didn’t put our name on them.

Some weeks later, crates were delivered to our house  near Chicago. Thankfully all other furniture was correct. But the chairs from this little shop on the edge of a dusty lane – so close that the road dust settled on the chairs , you can see it in the photos – well, the chairs were not the chairs we saw.

I don’t even have “before” photos of the chairs. I think my husband deleted them, they were so ugly, he probably thought “why keep these photos?” They were yellow honey color. They had grape vines engraved on the backrest. Grape vines on a Chinese style chair? They had plastic-covered pastel flowery cushions that were horrifically sticky. Seriously, so sticky that when I sat on a chair in shorts, the cushion was still stuck to the back of my legs when I stood up. And it hurt when I peeled the cushion off.

One Reply to “#tbt Story: When the Wrong Chair is Shipped from Thailand”