Otomi is a folk art pattern that’s embroidered in bright colors by the Otomi people in Mexico. To learn more and see lots of colorful examples of it, visit a great article about Otomi at Paint + Pattern. And here’s a few ideas of how and where to use Otomi textiles: 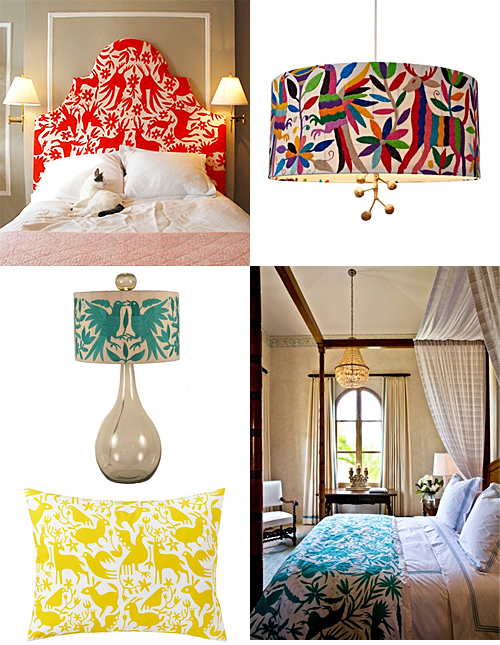 Did you know you can paint an Otomi pattern yourself with stencils? You can use an Otomi stencil to paint a table runner or even paint an entire small table, like this inexpensive Ikea table that was painted with stencils (see the whole story and how-to here): 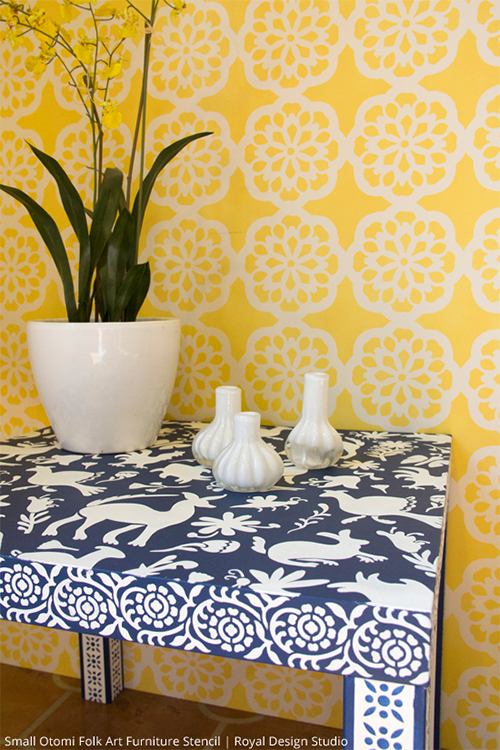 This is why I love stencils. I unfortunately don’t have the skill to draw or paint a pattern “from scratch.” But I can take things that already exist and put them together. And so can you! Stencils make it really easy to do that. For example in the photo above of the little Ikea table, you just 1.) look for stencil patterns that would fit on the table top, sides and legs and then 2.) paint them which is so easy to do.

So I had the idea to put Otomi pattern on tote bags for totin’ to the summer farmers markets. With the color and joyful dancing patterns, doesn’t this feel summery? I used Royal Design Studio’s Otomi stencil — the same one used on the table above — in the smaller size. And here’s the final result — a colorful tote bag that I created for an article at Paint + Pattern blogzine about how to DIY a bag like this: 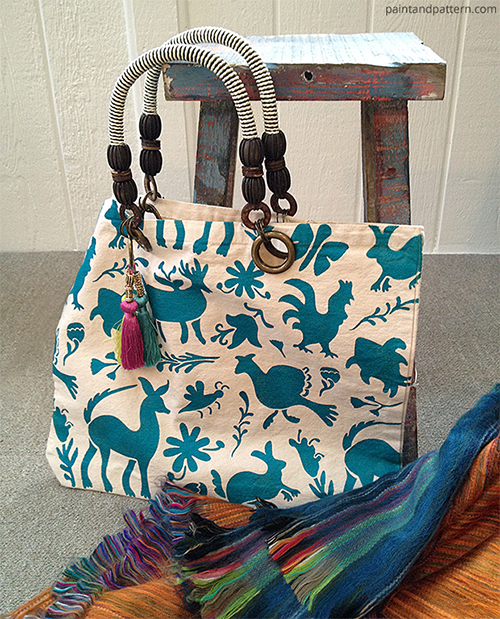 Seriously, this was so fun to paint, I made two in different colors!

All the how-to steps and supplies to make this are in my article over at Paint + Pattern — check it out!

If you like the embroidered examples above — the headboard, lamps, pillow and bed throw — you can paint fabric to turn in to these things. And when you paint, you can choose whatever color you want.

You might have noticed I’ve done a lot of stencil projects lately. And there’s a reason for that. With stencils it’s so easy to get a really impactful look that looks like it took a lot more effort than it really did. Of course when you’re painting there’s some preparation time (I even pre-washed and ironed the tote bags to avoid shrinkage later), and you get a better result when you paint slower rather than faster. But would you be able to create this Otomi pattern yourself? Most likely not. And if you tried, it would take a ton of time. With a stencil, the pattern is already done for you. So that’s what I mean about getting a lot of impact for the time you put into a project.

This blog might make it look like I have unlimited time to do DIYs and write about decor, but I really don’t. I have a full-time job, a Chicago-style commute, a house that needs work, and in the spring/summer a big property that needs attention so it’s not over-run with out-of-control plants. Plus, you know, we do fun stuff not just house stuff too!

But I think this just proves my point — the reason I love stencils is you can get a stylish and satisfying project done that looks like it took a lot more to do it than it really did!