My parent’s 50th wedding anniversary was last month — worth celebrating, right!? While they said they did not want us to give gifts, how can you not give something? They didn’t want us to spend on more stuff because we all have plenty of stuff. So I decided to give a gift of “art from the heart.” Made by me, with things found around our house: 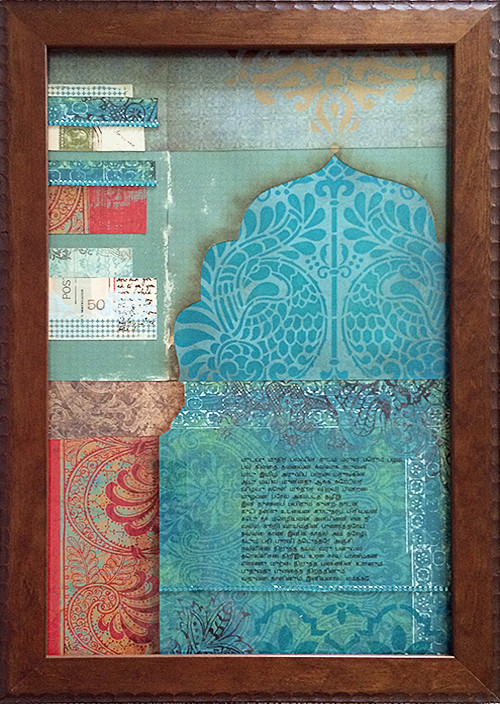 Today I’ll share a story of the bizarre, silly trail of thought that can happen when you develop a creative project. This 50th wedding anniversary gift had inspiration that a 50th anniversary should not have! In the next post I’ll share a how-to tutorial.

So first, what is this art made with? Well, layered and patterned collages made with scrapbook papers and paint are becoming my “thing to do.”

I already had a foot-tall stack of patterned scrapbook papers to choose from in my craft stash. Paper is a perfect memento as my mom, sister and I usually play with paper when we get together, and do silly giggling and sometimes snort-laughing. One time my mom wound up with potato chips behind her glasses and I don’t know how that happened but there is photographic evidence. Which I won’t post here!

So what to create with the paper and paint?

This is where my inspiration process can go on a weird, wild ride. The inspiration trail started with a promo email from Jaypore, one of my favorite sellers of creations from India. The email had a “love poems in marble” theme with products made of inlaid marble like you see in Agra at the Taj Mahal. 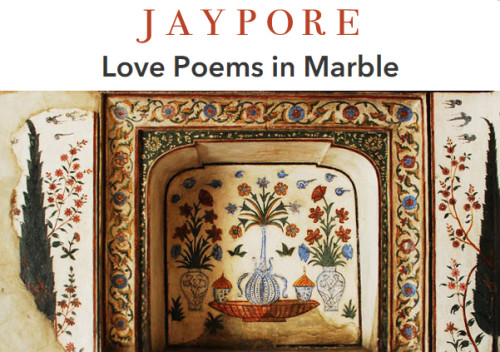 So thinking of love symbols, and with my affinity for India, of course the Taj Mahal’s story would be dreamy! Right? A man commissions this immense structure that took over 20 years to build, because of his eternal love for his favorite wife among all his wives!

My dad actually has only one wife so I am pretty sure she is his favorite as well. I have stencils that could replicate the Taj Mahal’s floral inlaid patterns. I could paint a “love poem in marble!” I even searched for romantic sentiments uttered by Shah Jahan (the creator of the Taj) for his favorite wife Mumtaz Mahal, to turn into a love poem. 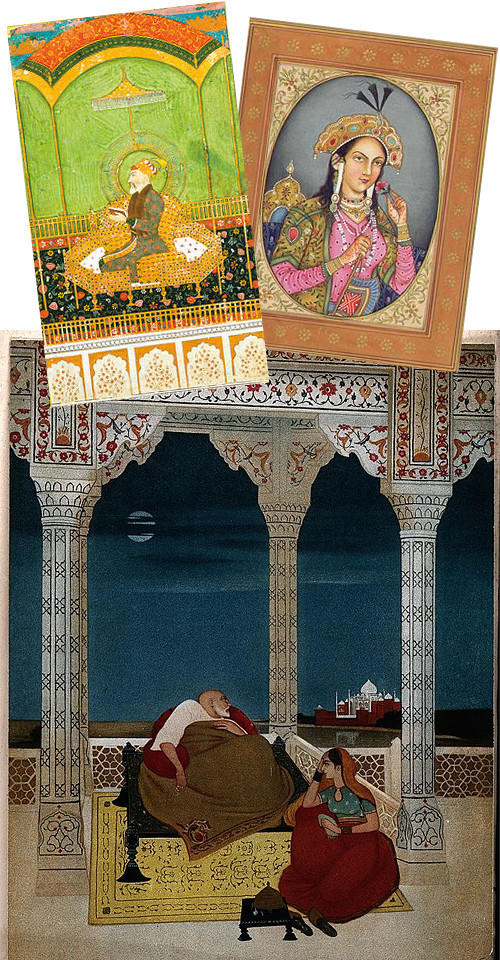 Above is Shah Jahan gazing at the Taj Mahal, the final resting place of his beloved Mumaz Mahal, while he was under house arrest in Agra. Clearly that is not his beloved Mumtaz Mahal with him, but as I said, he had numerous wives, so apparently whatever is going on is all legit.

But other than the polygamy problem, the dreamy love dream totally blew up in my face for another reason. Because the Taj Mahal is a mausoleum! Built out of great love, yes, but “morbid mausoleum art” inspired by a building built for a dead wife is not the celebratory tone I was shooting for, for a 50th wedding anniversary where both people are very much alive. 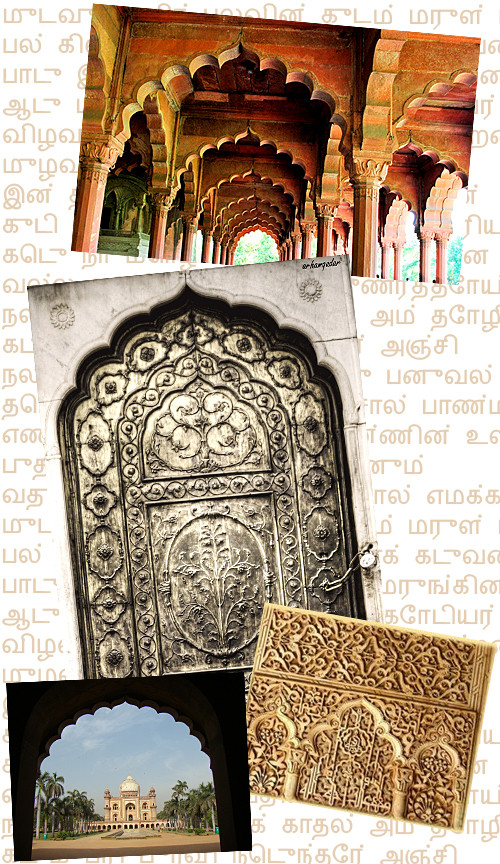 I always “saw” a Mughal arch as part of the design. I could still use an arch, it just wouldn’t be the Taj Mahal. Instead, I saw a collage of an anonymous Mughal arch and … script! But what script? Well, what about literally, a love poem? A love poem in Hindi? Because at this point in ideation, my mind was still geographically close to the Taj Mahal and Mughal architecture and today’s leading language of the area.

The thing is, I have a husband who is from India. And he doesn’t speak Hindi at all. I’m not sure why whether my husband speaks Hindi or not should have anything to do with an anniversary gift for my parents. But it felt weird. In fact my husband speaks so little Hindi that the time we visited the Taj Mahal, we couldn’t communicate well with the taxi driver who drove us from Delhi to Agra. I was trying to translate English to Hindi on an iPhone app! That whole taxi drive turned into an experience we’d rather forget. Let’s just say he drove us into areas of Agra where there were very sad things to see. Long frustrating story short, turns out our driver couldn’t read the signs saying “Taj Mahal” in English on the freeway, so he didn’t know the way, which we didn’t know until we got in places where we shouldn’t be. 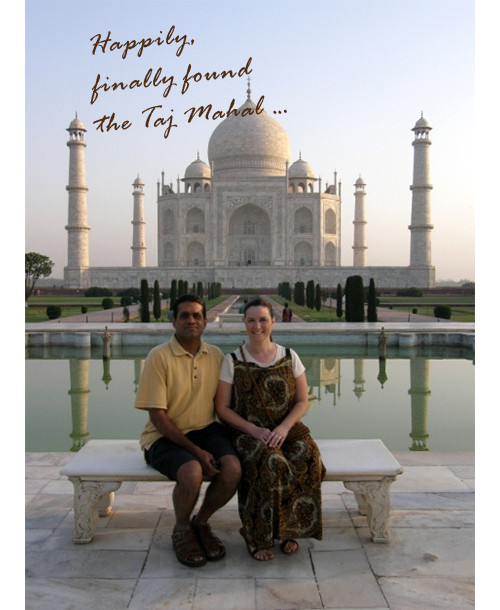 Anyway, when giving a gift it’s best to have happy associations. With that memory, putting a Hindi poem in this collage was maybe not the best idea.

So the next obvious idea is, why not find love poems in Tamil? Tamil is my husband’s native language and it also looks pretty when written, and perhaps even prettier when printed over patterns on papers. Priorities, here. 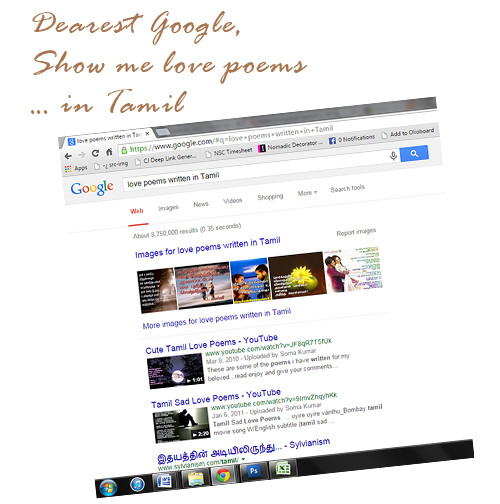 But finding “love poems written in Tamil” is kind of an obscure thing to seek! Thankfully for Google, I found “Sangam poems.” I learned it was a time in South India thousands of years ago. There were gatherings of poets and scholars and they wrote volumes literally and figuratively. The first web site I found had samples of Sangam love poems written in English and some were a pleasure to read. But what’s the point of a Tamil love poem written in English? So while spending entire episodes of House Hunters searching Google, I hit the jackpot. THOUSANDS (!!!) of Sangam poems!! All with Tamil script I can cut n’ paste into Photoshop!! My vision is gonna happen. SO exciting. 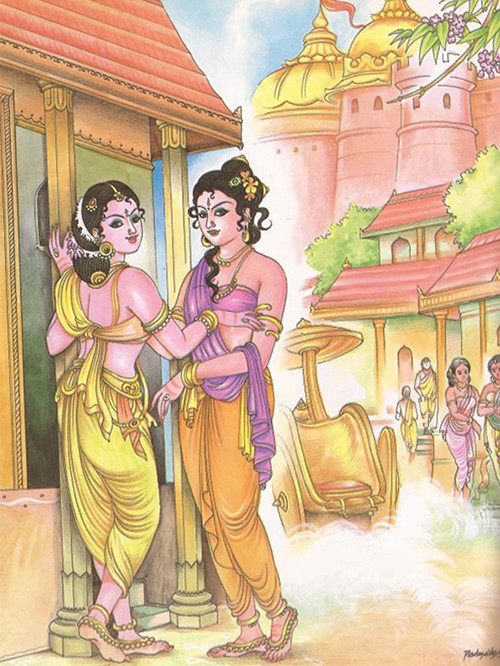 So exciting, except for that part about THOUSANDS of poems. And wading through hundreds of them to find just the right tone. Because a poem might be promising at first. A heroine is pining after her hero. Who left her behind in the village to go earn wealth after traveling over vast unknown distances through dangerous forests. The longing of the heart, how sweet! But then with no transition, the next line might be about bloody elephant tusks. And tigers ripping things apart.

People write about what they know. Obviously villagers were traumatized by elephants and tigers. They kept parrots and grew millet and bamboo. Women wore bangles and anklets. The villagers were afraid of the forests. There were warriors with spears and you’d better steer clear of them. Fishermen lusted after (for us in today’s times) under-age girls. There were lots of kohl-lined eyes. It’s not socially acceptable to leave the village to pursue wealth. While reading these poems, I learned a bit about life in South India long ago. I’d just like a bit more transition between the love sentiments and the killing of people in various ways. 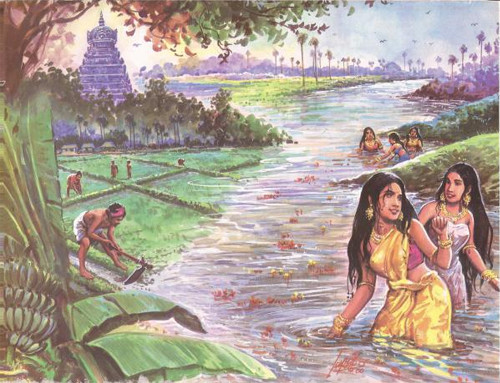 WHAT KIND OF HEART DOES YOUR DAUGHTER HAVE

I also realize my parents would have no idea what the poem says if it’s printed in Tamil script atop a pretty scrapbook paper. I could even give a made-up translation! Which after reading 300 poems and not finding the right tone — there’s a lot of death, infidelity, and even eloping with forbidden loves — I seriously considered making up a poem. But I pressed on. Because a successful 50-year marriage cannot be built upon lies. So why would I put a fake poem — a big lie of a poem — in an art piece celebrating such a marriage? And what if by some chance someone  who knows Tamil visited my parents. And my parents (hopefully) proudly show off this “art from the heart” of their daughter. And the Tamil marriage love poem is actually a story of infidelity and lust for children. Oh my! What kind of heart does your daughter have?!?

I finally found a poem that would work. What I was thinking at that point is fuzzy. Because it was 2:00 a.m. on a Saturday night and I fell asleep on the couch. Without any pillow or blanket or anything. But I had a poem! 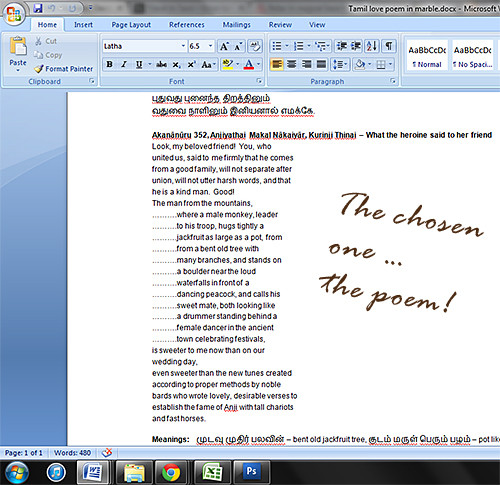 The next morning, because details are important, I thought using a North Indian Mughal arch might be inconsistent with a South Indian Tamil poem. So I go Googling again. And behold! I find information about architecture during the Sangam period when the poems were written. Then I find Chola temples in Thanjavur and they have arches. Yay! The arches fit the vision I originally saw. Although I know more about the Chola than is maybe healthy to know, I didn’t know whether the Chola ruled during the Sangam period. So, checked that detail. And indeed they did. Happy, happy.

I’ve got an arch.

They mesh well together.

This is how a creative project typically “germinates” here. Sometimes strange trails are followed to find inspiration.

This post has gotten long enough. So in a Part 2 post, I’ll show the DIY “how to do it” steps and you’ll see the vision emerge. I don’t think the final art is perverted or morbid, so it turned out okay.

2 Replies to “Story of 50th Wedding Anniversary Art from the Perverted, Morbid Heart”