Usually I appreciate textured surfaces, and the occasional chippy paint. I love an “old wall” look. But I don’t love it when my house looks like this: 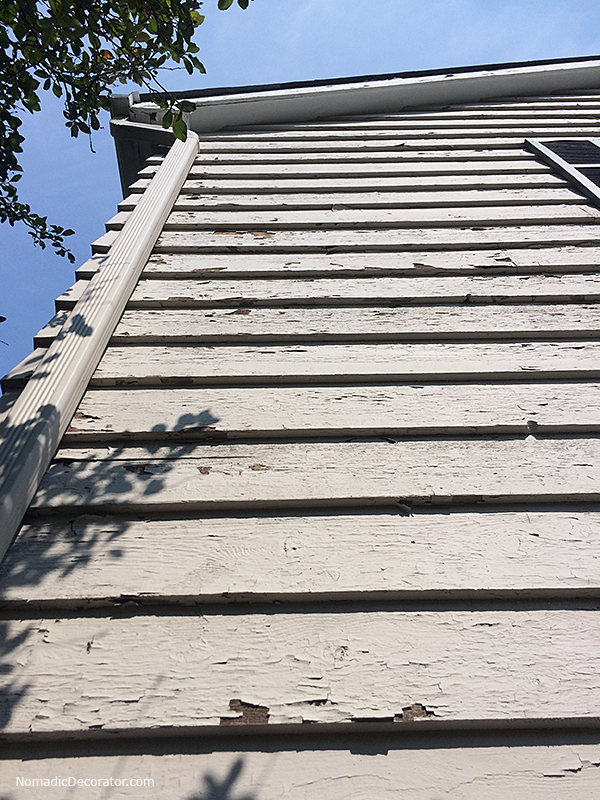 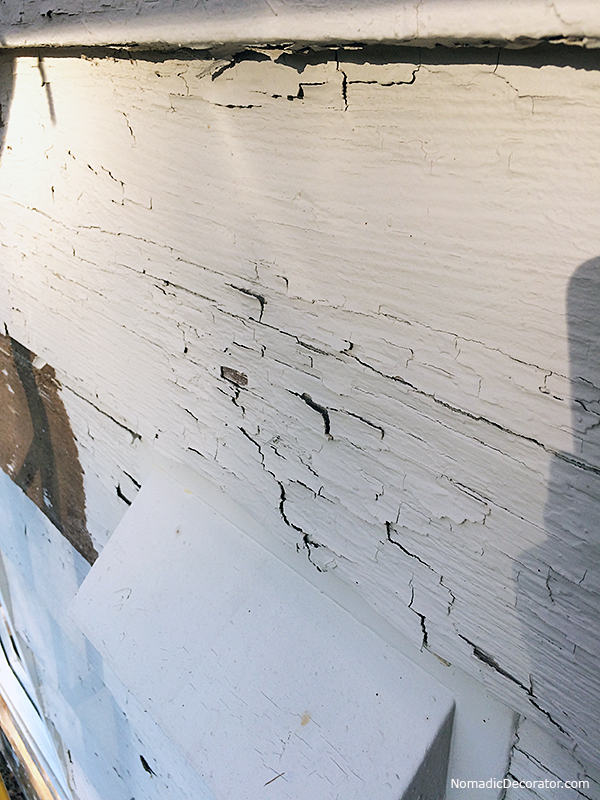 Twice in the past 10 years, we paid contractors to scrape and paint our cedar-sided house. But they scraped pretty much half-heartedly, kind of just barely. It’s not a fun job, for sure. Now we’re doing the job. On all 3,000 sq ft of siding. 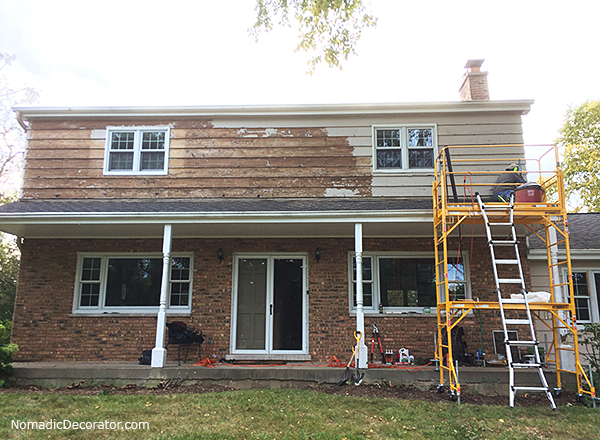 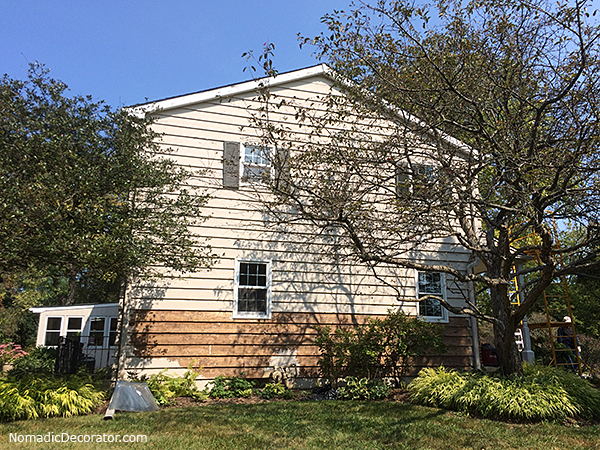 We HAVE to. Because when you’re up close, it looks like we have the haunted house on the block. And beyond the looks, the siding and house are not protected from the elements. Though we have cedar which is rot-resistant, some areas are starting to rot and rot is spreading.

Some neighbors warned us, don’t do it yourselves!! Replace the siding instead! It’s easier! Yeah and that’s really expensive. And there isn’t much wrong with the cedar. Sure there are a few rotten areas and some woodpecker holes. But they can be easily fixed with epoxy and rot terminator, or replaced with a few new cedar boards. Our house is nearly 50 years old. I think that 50-year-old cedar is better than today’s new cedar?

We talked with several contractors about doing this full job of scraping all wood down to raw wood. Some wouldn’t even do it. Others quoted way more than we can pay for the entire job, I’m talking some quotes were around $18,000! We’ve already paid many thousands — twice — in the last 10 years for re-painting.

So, this time we’re doing it. 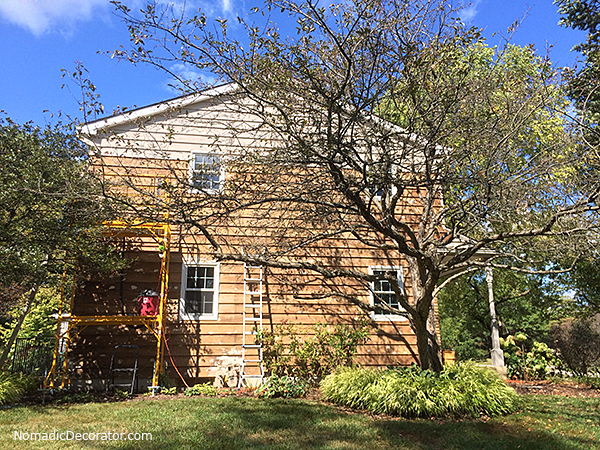 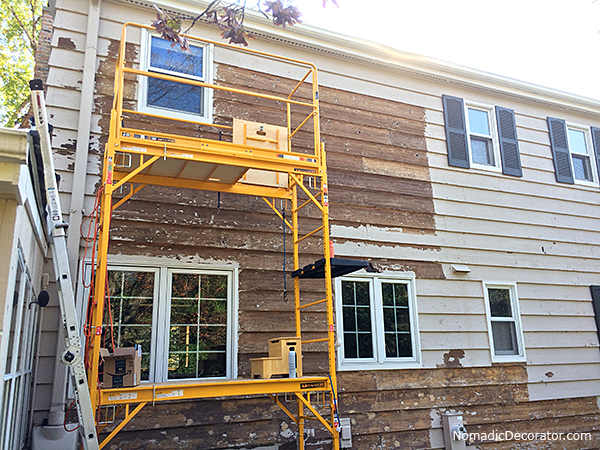 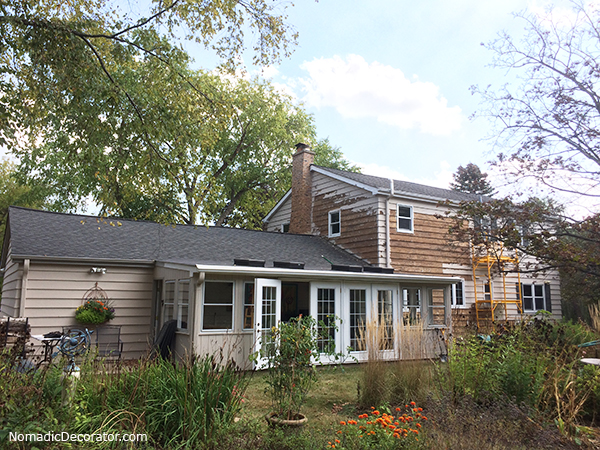 We live near Chicago, so we’re in a race against the weather. We have to finish before snow flies. But seeing that it’s 95 degrees on September 23 — thus I’m indoors writing a blog post at high noon and not scraping, sanding etc. outdoors — maybe we’ll have more time than we think.

Here’s a video from this morning. We have to organize our days around the sun, so we work as much as possible in the shade. For awhile, the wall over our garage was shaded:

So, this blog has been quiet for a long time because I’ve been very busy. I’ve been busy since spring on this project. It started with researching everything we’re doing, and then actually doing it. I don’t know how bloggers who do serious big-time renovations can do the work AND edit the photos AND write about it. I’ve been physically and mentally exhausted after days of this work! But I will say, this also feels like good healthy work for the body.

This project is also a perfect time for design changes on the exterior of the house. Of course you know I love opportunity for that!

So this was a quick update for now, more later! 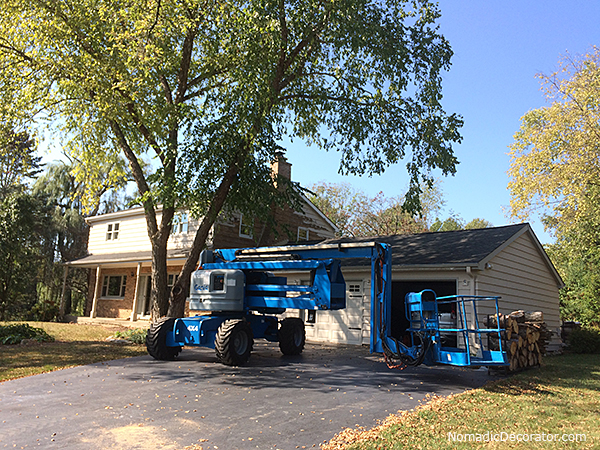