When people talk of the early days of Moroccan style and the European and American jetsetters of the 1960s and 70s, the talk is often about Talitha Getty. Her multi-cultural “couture of the souks” style is captured in this iconic Vogue magazine photo, nowadays re-created by travelers on riad rooftops: 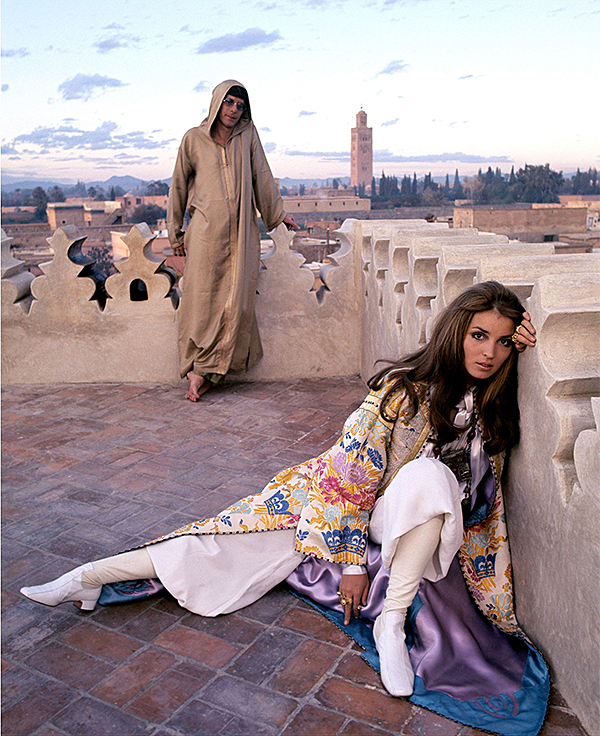 Talitha and her husband, John Paul Getty, Jr., who was the son of the richest man in the world at the time, enjoyed a high-flying lifestyle that revolved around world leaders in music and fashion. Yves St. Laurent was a good friend and fellow resident of Marrakech. The Beatles and the Rolling Stones spent a Christmas together in their palace. And parties, many parties. Talitha Getty knew how to throw a party:

“A welcoming, fantastical, joyous life, at once sensible and sybaritic . . . Mrs. Getty prowls the marketplace, bringing back delights for the house and table. Best she brings back entertainers—dancers, acrobats, storytellers, geomancers and magicians. … While Salome is playing in the background, snake charmers charm and tea boys dance, balancing on their feet trays freighted with mint tea and burning candles.” – Diana Vreeland, Vogue

Like Lady Diana and Princess Grace of Monaco, Talitha’s mystique may be amplified because she died so young, at age 30. She is frozen in time with flawless skin and lush hair. Diana Vreeland said that Talitha was THE style icon during her Moroccan caftan and Persian jewelry years. Talitha to this day is still celebrated as a style muse by fashion designers. 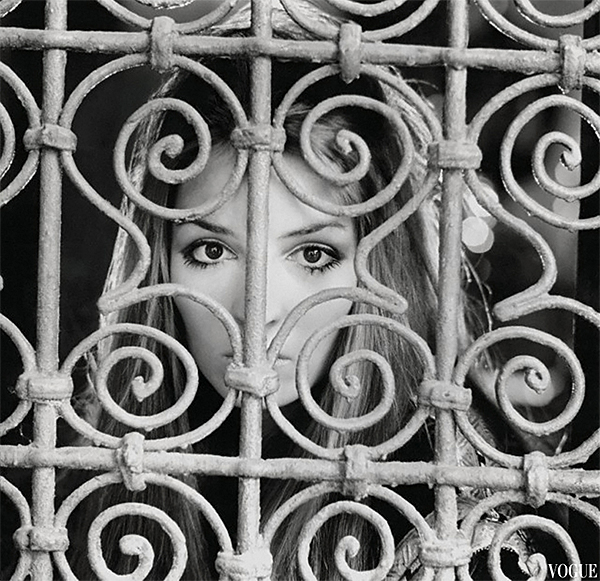 Not a ton of photos of Talitha exist, but I captured all photos I could find on a Pinterest board of Talitha Getty style.

There was someone else who revolved in the Getty’s beautifully-designed orbit in Marrakech.

Someone who had a bigger, more enduring influence on Moroccan style. I bet you haven’t heard of him. He deserved greater public recognition because hallmarks of Marrakech style today are traced to him. He revived dying arts and filled opulent homes with beautiful tiles and tadelakt walls, ceilings, fireplaces, floors and furniture. The funny thing is, he wasn’t Moroccan. He was from Memphis.

His name was Bill Willis.

(Please forgive me if I slip up and call him Bruce Willis and don’t catch it. It wouldn’t be the first time!)

Have you admired the tadelakt walls in Marrakech homes? That is because of Bill Willis. Before Bill, tadelakt was used in the hammams because it’s waterproof. It was not used throughout houses. But this polished plaster surface is now the quintessential Marrakech wall.

Have you seen crazy, colorful combinations of patterned tiles on fireplaces in Marrakech? That is because of Bill Willis. He restored and revived zellij mosaic tilework and brought it into the 20th century with a “modern ideas with Moroccan materials” mentality.

Now, because Bill Willis outlived Talitha by many decades (she died in 1971, he in 2009), he had far more time to do his work. Bill’s design legacy in Marrakech began with Talitha Getty, so she started the ball rolling. Bill accompanied the Gettys on their honeymoon in Marrakech, where they bought a ramshackle rubble of a palace for $10,000 in 1966. It was once a royal place, but was now a ruin. Here’s Bill standing outside of it: 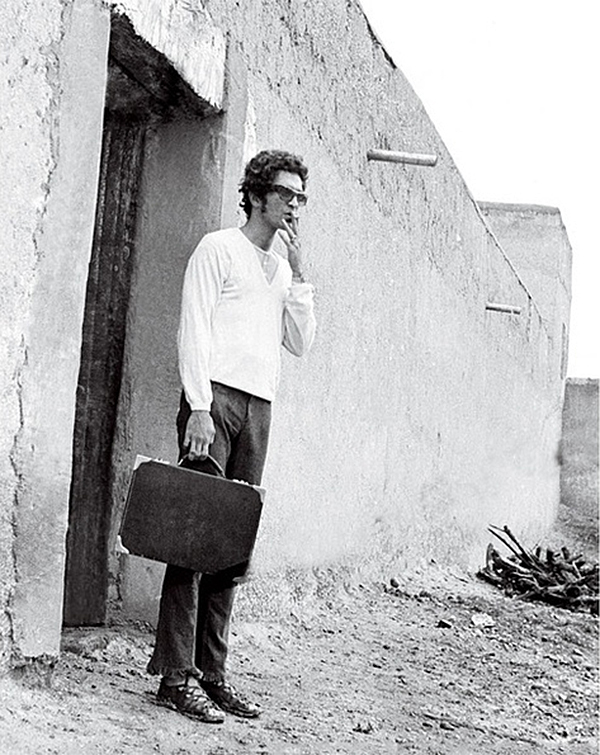 This was in the 1960s, long before Marrakech was the tourist attraction that it is today. I imagine it was beyond rough for travelers used to luxury. But from this ruin, within only a few years, Bill Willis and the Gettys created breathtaking beauty. They created a place with a name prepared for debauchery:  Palais du Zahir (also known as Palais de la Zahia) — the Pleasure Palace. 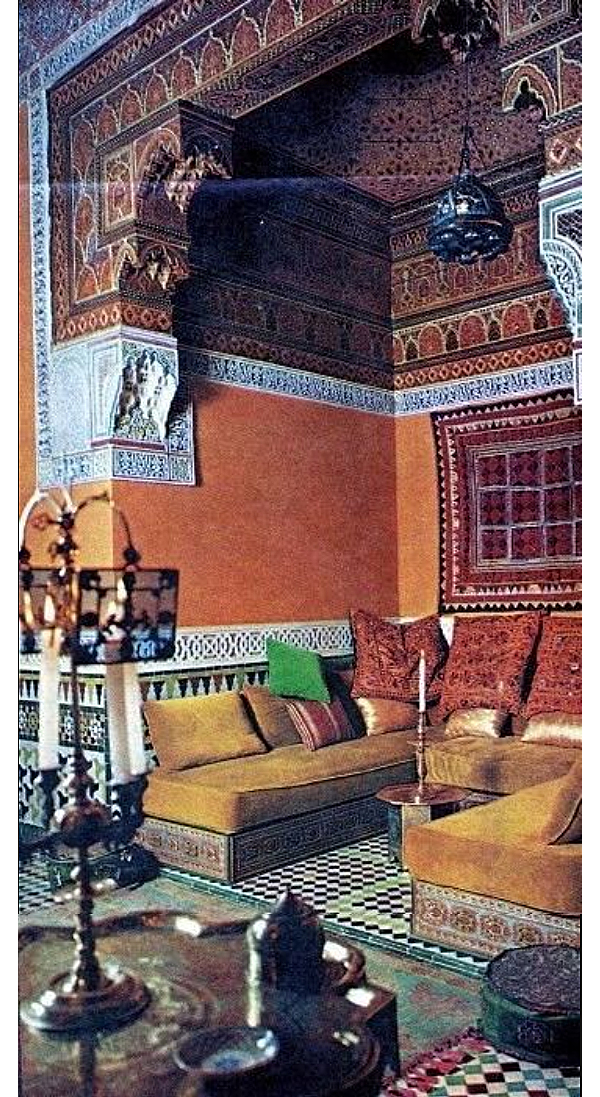 “Bill created the Marrakech look, and it started with that house,” says the decorator Jacques Grange

Not many photos of Palais du Zahir from the Getty days exist publicly. I have a rare book of Bill Willis’ work — you can only get it at the Majorelle Gardens bookstore in Marrakech, unless you’re willing to pay $300+ for the rare times it pops up on eBay or Amazon — and Palais du Zahir is not in the book. But recently, I found a video about Bill that shows the Getty palace. It’s a long video that explains Bill’s influence on Marrakech style as you know it today. The palace is shown at about the 6 minute mark:

I hit replay and screen-captured those Palais du Zahir rooms like a crazy obsessed woman!

Here’s a few more pictures of the palace from the 1970 January Vogue issue, photographed by Patrick Lichfield: 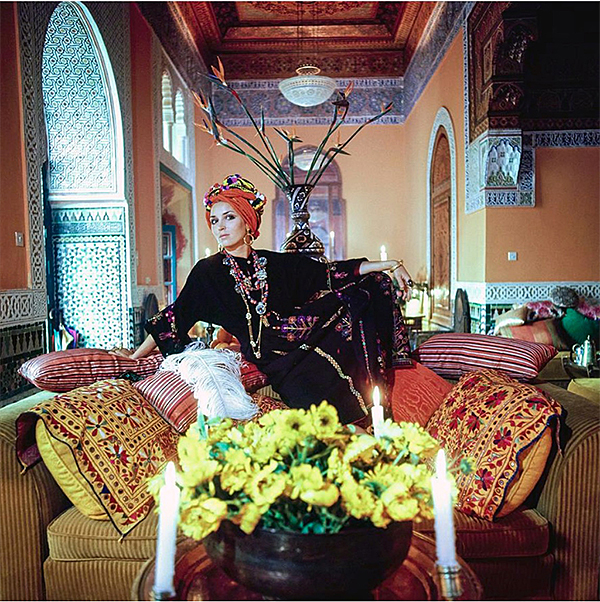 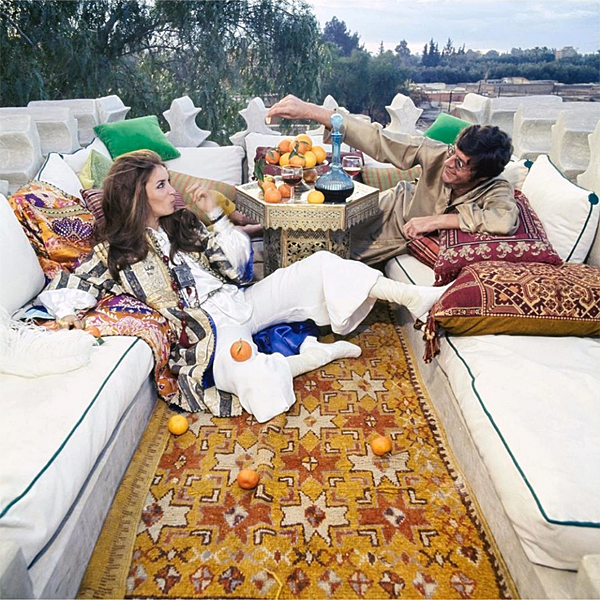 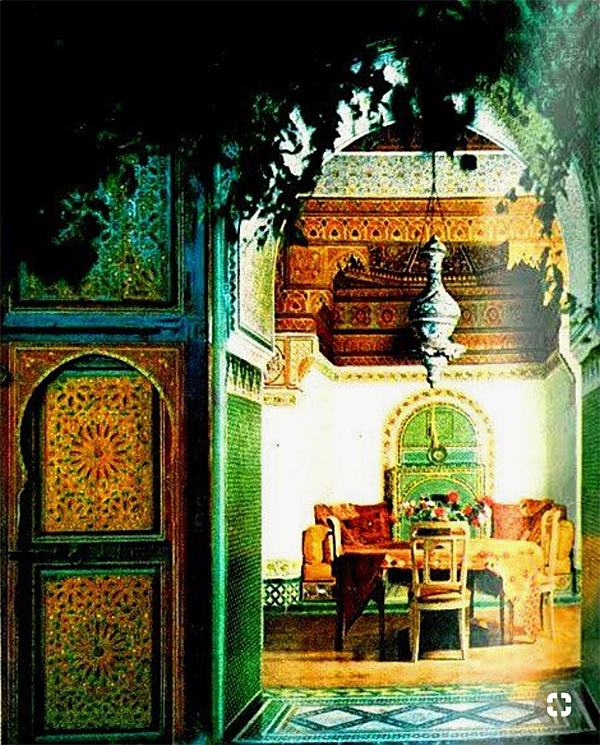 If you ever want the original Vogue issue, I found mine on eBay and see them there occasionally. I could probably be persuaded to part with mine!

Today, the palace is owned by writer Bernard-Henri Lévy and his actress wife Arielle Dombasle. Here’s the most famous rooftop in Marrakech as it is today, shown in WSJ Magazine: 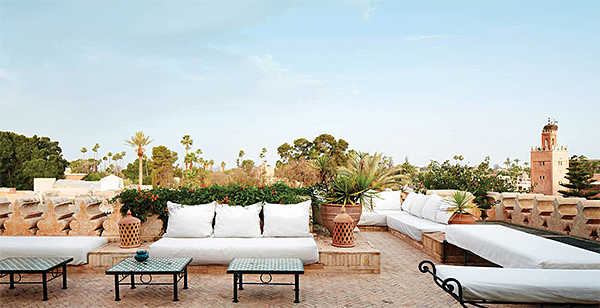 I notice, it has a different brick floor now. Unless this is a different area of the roof than what we see in the 1970 Vogue magazine. 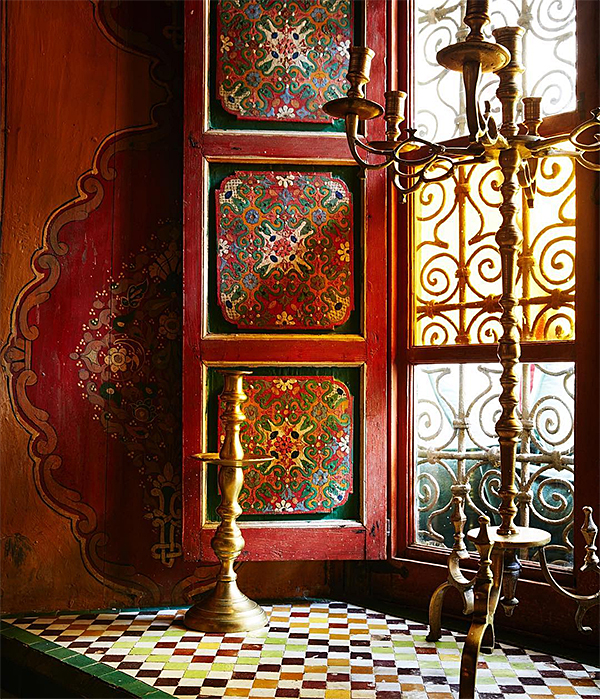 Don’t those look like the same iron grilles that Talitha is peeking through in the photo above? 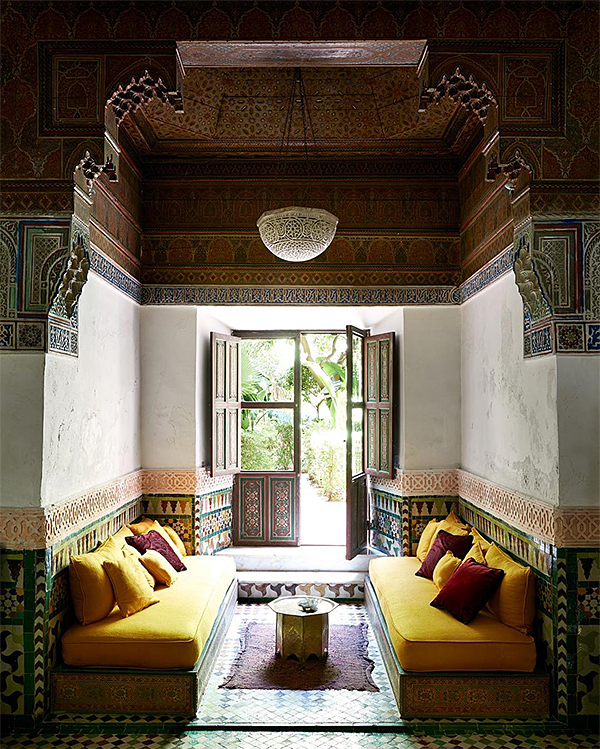 No longer a place of drug-fueled hedonistic parties (none other than Keith Richards said that Talitha Getty had access to the best opium), now the palace is a discreet address where feuding world leaders gather in privacy and try to broker peace, and for an intellectual writer to think and write in solitude. Some palace walls have stood since the 1500s or the 1700s, depending on who you ask. Oh, what the walls must have seen over the centuries!

The current owners worked with Bill Willis before his death to honor his contributions to the palace’s style. According to the Wall Street Journal:

“They still use the furniture Willis designed for the Gettys, including a four-poster bed painted like the Good Ship Lollipop in a fantasia of ice cream colors and Berber-inspired motifs.”

Bill Willis’ contribution to Marrakech and Moroccan style is now unnoticed and unappreciated. Some of that appears to be his own fault. Though he had a reputation as an exacting and demanding designer, he slept until late afternoon and his neighbors thought he was a vampire. And he was intoxicated during most waking hours. Despite that, his genius still prevailed in glorious Marrakech architecture. Efforts might be underway to raise his profile, possibly through the riad that was once his home in Marrakech.

How often does a designer influence the style of a whole city? And in a way that stimulates a whole travel and tourism industry, boosting an entire economy? At every corner you turn in Marrakech, there are photo ops. Old walls, old doors, what’s below your feet and above your head, somehow it’s all very special. Marrakech inspires our imaginations. Captures us and makes us want to return. Would Bill Willis have ever imagined that happening? Beyond many nondescript doors and plain medina walls there is glittering opulence, pierced metal lanterns casting dancing shadows, woven textiles exploding with color against fantastical patterned walls. Run your hands along the cool smooth tadelakt walls. Bill Willis made that possible.