I came back from Marrakech in November with patterns swirling in my head. We can see all these pictures on Pinterest, Flickr and Google Images, but it’s different to be there in person, surrounded by Moroccan patterns on six sides — on not just four walls, but floors and ceilings too! Here’s a small sample of patterns I “collected” almost like a botanist collects plant cuttings when traveling. Then, I will show you how the patterns inspired some painted gift boxes …

Patterns at the Bahia Palace: 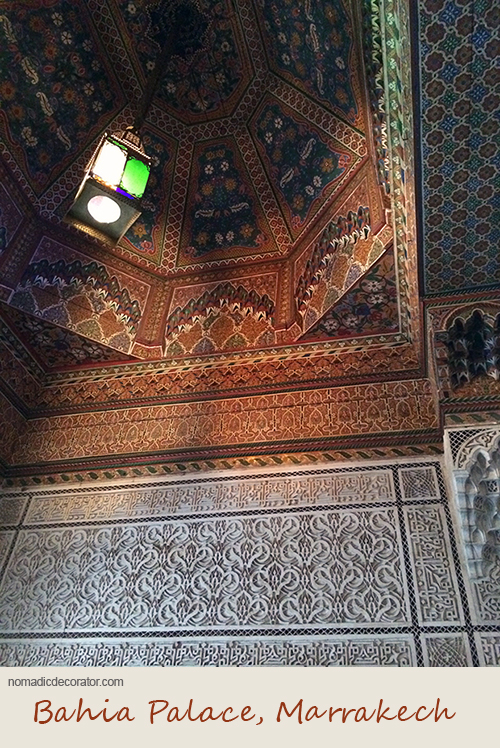 At the Saadian Tombs: 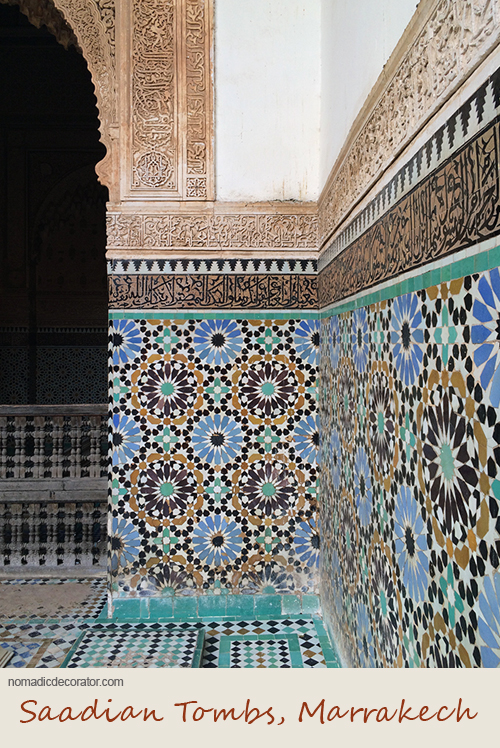 At the Royal Mansour, written about previously here but now I got to see it in person: 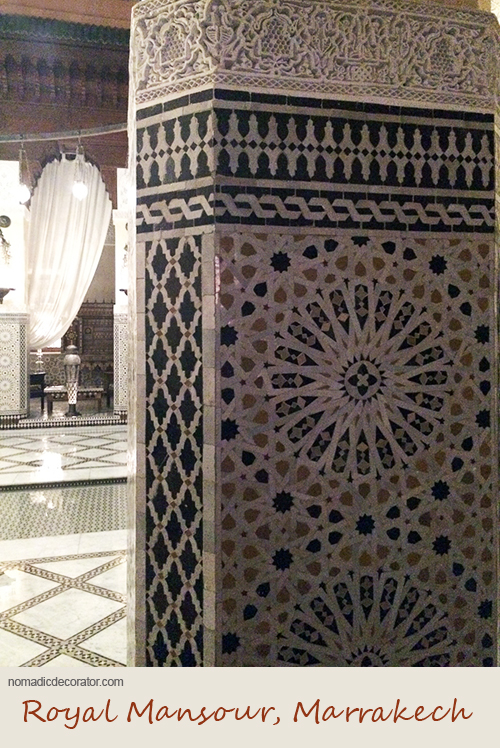 Oh, I have so many pictures, but it would be like making you sit and watch a slide show and I wouldn’t do that to you (anyone here old enough to have watched a relative’s vacation slide show in their living room?!). At least not unless I can give you some great popcorn and your preferred drinks. Because I can’t do that through a blog, those are pictures of just three of the coolest pattern combinations out of many I saw.

Inspired by all these patterns, I pulled out some Moroccan and Indian stencils from Royal Design Studio and played with them: 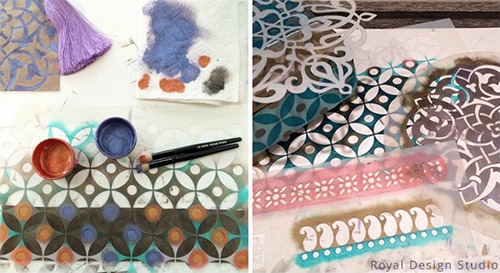 And this is what I created with them – Moroccan leather gift boxes! 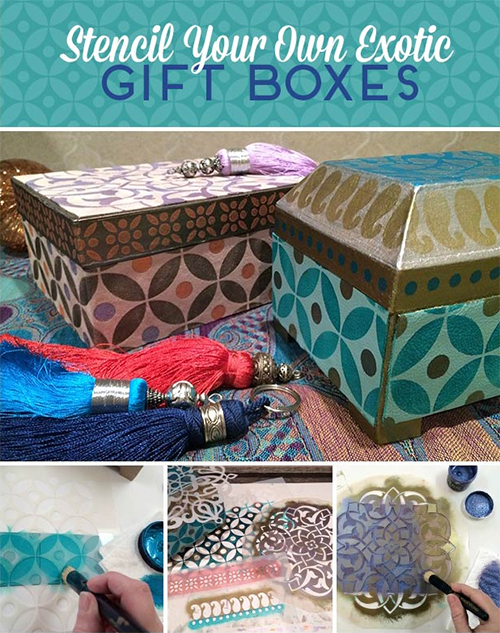 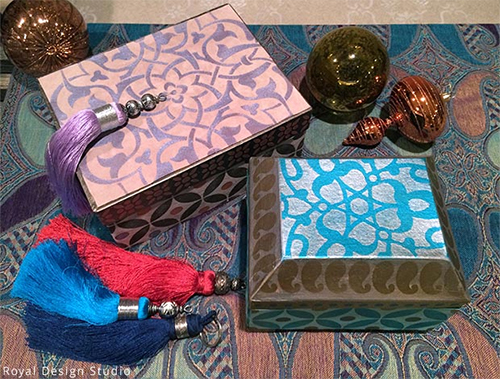 If you want to make gift boxes like these, visit my how-to tutorial at PaintandPattern.com. I share a supplies list and the steps to do this there. I also share sources for where to find leather and other supplies.

These are paper maché boxes you can get at any hobby store like JoAnn, Michaels or Hobby Lobby. I glued pieces of leather to the boxes. I painted stencils on the leather and on the paper maché. You don’t have to do the leather part — you can paint right on the boxes and you’ll get the same look.

The keys to getting this mixed pattern look are this:

When choosing patterns, I took some cues from the Marrakech pictures. If you study the little three-picture “slide show” above from Marrakech, there’s something all those scenes have in common. They each have geometric tiles. And they each have curvy scrolly shapes in carved stone.

So I took inspiration from those patterns, and chose a mix of geometric stencils and scrolly medallion stencils. And I mixed all these patterns together on a single box. If you want to have fun playing with patterns, doing it on a small project like this is a good way to do it. It’s less overwhelming than say, doing a whole wall with a crazy pattern mix like this.

Or, you could mix patterns on canvas or wood and make wall art!

So check out the tutorial at PaintandPattern.com if you want more how-to detail. If you like this idea but haven’t visited Paint and Pattern before, you might find a lot more you like over there — it’s a whole online blogzine about paint, stencils and patterns! I post projects there about twice a month.

And I hope this helps you see more potential with patterns and to be braver to try a crazier mix. I admit I’ve been shy about lots of mixed patterns but visiting Marrakech really opened my eyes.


There’s a Moroccan zellij pattern that I get drawn to over and over. Whenever it pops up on a website or Pinterest, little pattern antennae in my brain start quivering around happily. Why? Who knows. Is there a test that will tell you something about yourself if you like one pattern more than another? Like the visual pattern equivalent of Myers-Briggs? If there isn’t such a test, maybe I should create one? The Zellij Test.

Zellij (also spelled zellige) is a type of tile pattern in Morocco and it comes in lots of geometric patterns. Some circular. Some starry looking. Some striped. Some are squares and rectangles. If you’ve seen photos of colorful geometric ceramic tile patterns in Morocco, you’ve seen zellij. It takes both a patient artist and a precise mathematical genius to create these patterns.

The pattern I most appreciate for some mysterious reason is this one, with the squares and eight-point stars: 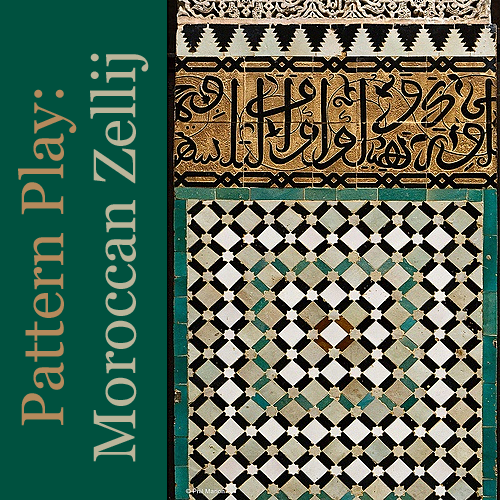 Those are often-photographed ceramic tiles in Fez, Morocco.

Here it’s on the lower half of a wall in a post about Moroccan zellij tiles on Sandra Espinet’s blog about well-traveled style: 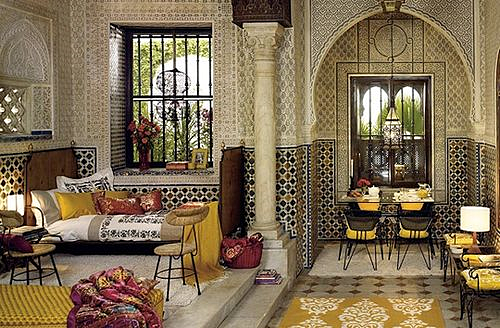 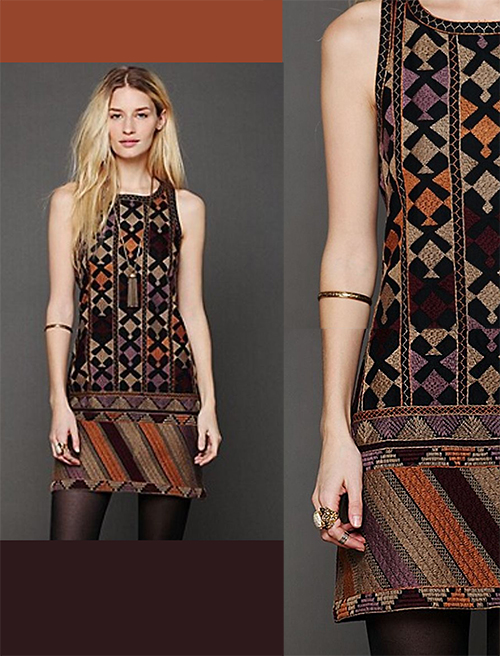 That dress is great inspiration for colors to use with this zellij pattern too.

A similar pattern with squares instead of the eight-point star is in the background of this image from Marie Claire: 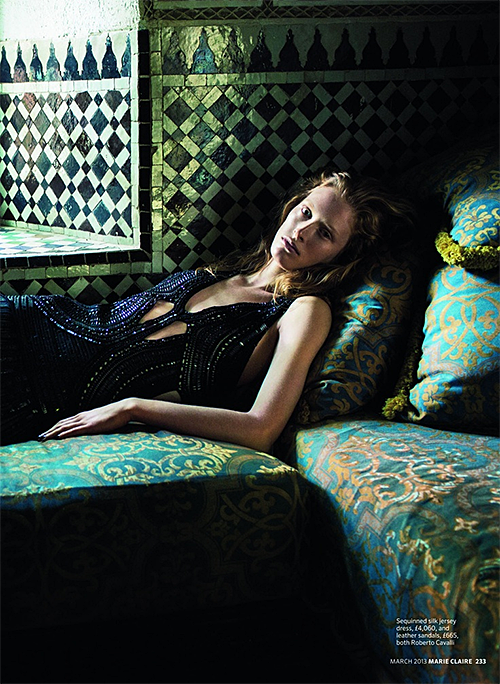 If you like this zellij pattern too, you can paint it on things yourself! It’s available in the Star Diamonds Moroccan stencil from Royal Design Studio: 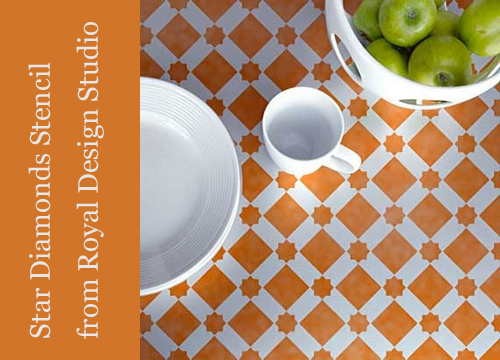 It’s available in two sizes and I own both, as I purchased them a few years ago for a wall in the master bedroom of our apartment in Chennai, India. This is the inspiration photo (from Vogue Living in Australia) and while I will take this inspiration and make it unique, I love it down to the tall columns flanking a low bed. Every time I see chippy painted wood columns with cement capitals in India, I see them in a scene like this in our apartment there: 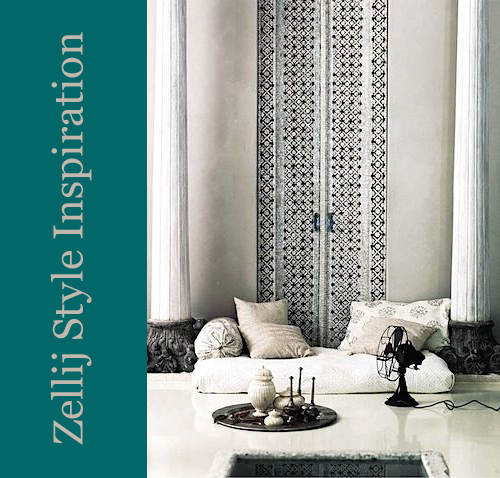 If this has piqued your interest in zellij, here’s a good article from Ceramics Today about zellij tile in Morocco. 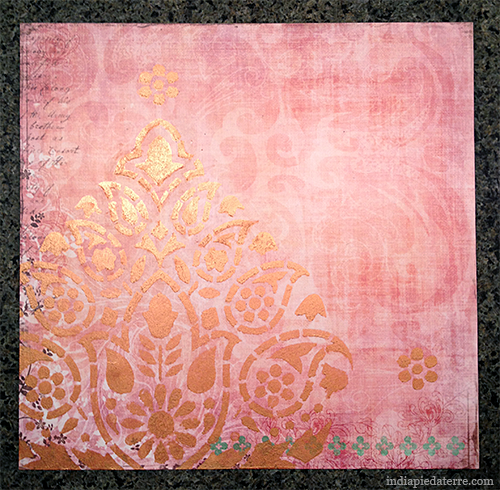 This is one of those projects where the final result looks like much more than the steps it took to make it.

END_OF_DOCUMENT_TOKEN_TO_BE_REPLACED


Oh boy, what you can do with sandstone. You’ll find the most intricate, delicate shapes in sandstone. This is because it’s softer to carve than granite or marble. This allows highly-decorated temples and mausoleums to be carved of sandstone. It’s like they’re embroidered with zari borders of stone, and ornamented with sequins of sand. And they stand the test of time. Let’s see some famous samples from India … 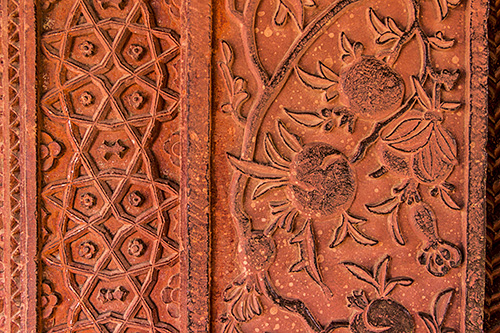 At the Red Fort in Delhi. Image credit: imagex of 123RF stock photo: 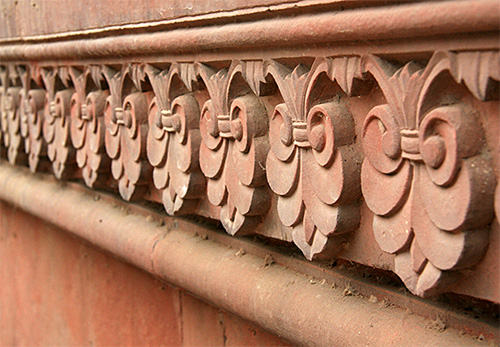 I don’t know exactly where this pattern is from, but it is the sort of pattern with Islamic and Middle Eastern roots that is common in North India. Image credit: anyamay of 123RF stock photo: 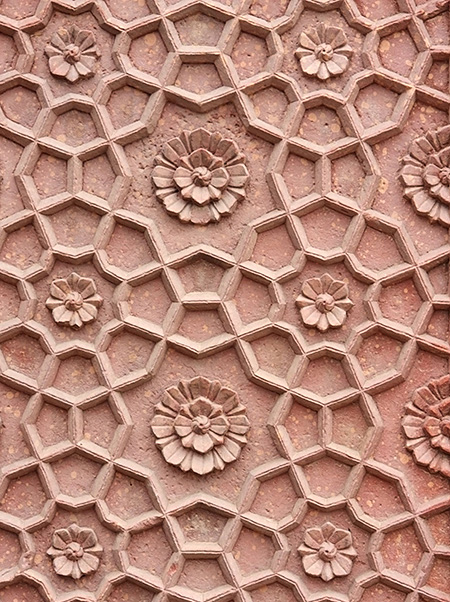 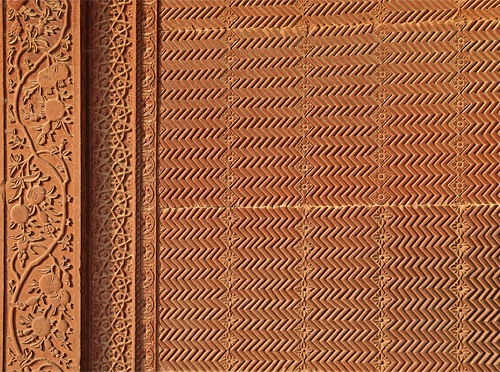 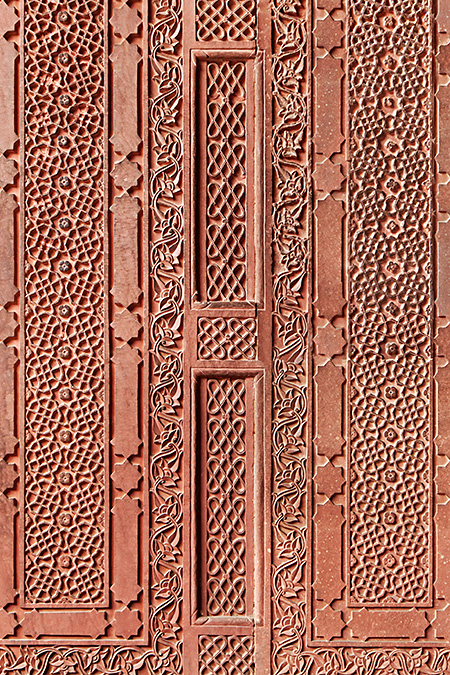 Fatehpur Sikri was a capital of the Mughal Empire for a very short while during the 16th century. Because red sandstone was readily available in the area, the city is built entirely with it. Not too long after it was constructed, it was mostly abandoned, until the late 1800s. It’s only about 40 kilometers from Agra and the Taj Mahal, so if you’re traveling to the area, it’s worth visiting Fatehpur Sikri.

The Red Fort is in Old Delhi, and was a residence of Mughal emperors centuries ago. It’s a massive complex covering 255 acres. The name Red Fort comes from the red sandstone. Designs carved into the sandstone are a Mughal style blend from Persia, Europe and India.

Both are now UNESCO World Heritage Sites so their art can be preserved for all to enjoy. I’ve shared close-up patterns here, but you can always search Google Images to see panoramic photos.