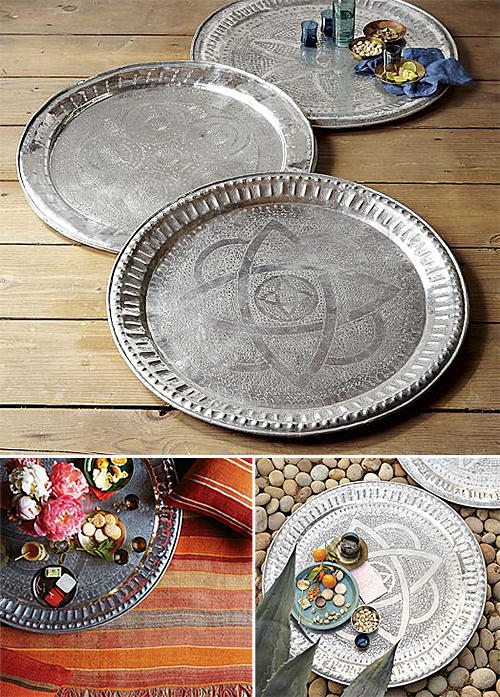 They come in copper color too: 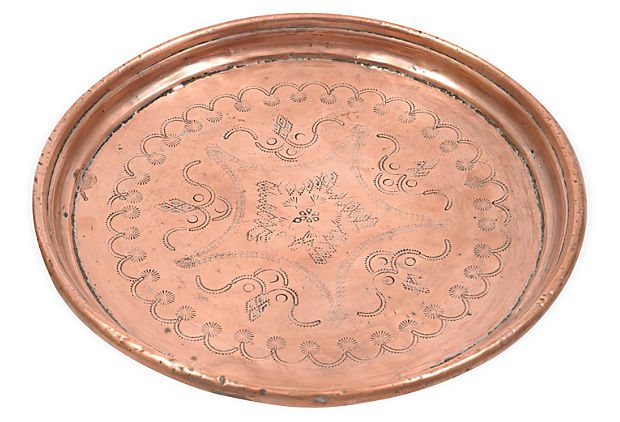 (From One Kings Lane, also no longer available – why do you think I’m DIY’ing?!)

You don’t have to travel far to get a tray like this. You only need travel as far as a Target, IKEA or anywhere else selling large round trays. And then a hobby shop for a few supplies. Or order the supplies you need online without ever leaving the chair you’re at right now.

Yes, you can easily make this, then dream of lands far away whenever you look at it. Here’s my finished result: 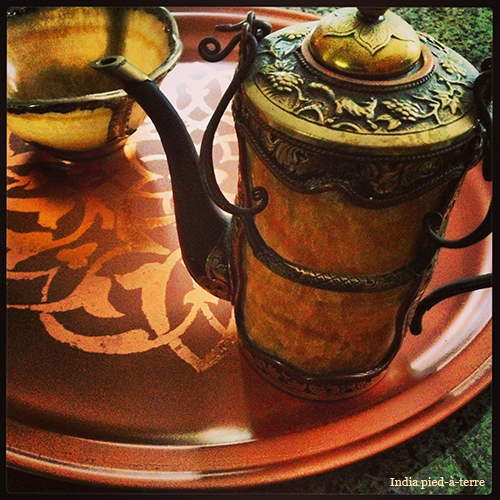 The tray was a basic shiny stainless steel tray from Target’s Threshold collection: 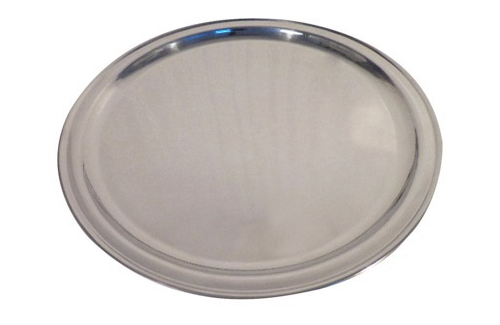 How to make it look like the “final result?” First, spray paint it with a copper paint. I used Krylon Metallic spray paint in 2203 Copper and the tray looked like this, a bright and pretty copper color: 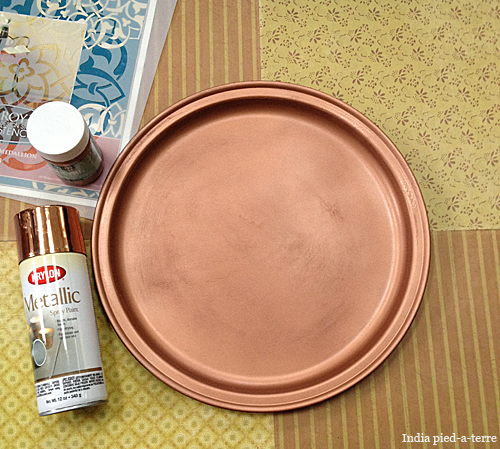 Once the spray paint dried (this paint was fast!), I used the Marrakech Medallion stencil from Royal Design Studio to make the exotic Moroccan “etching:” 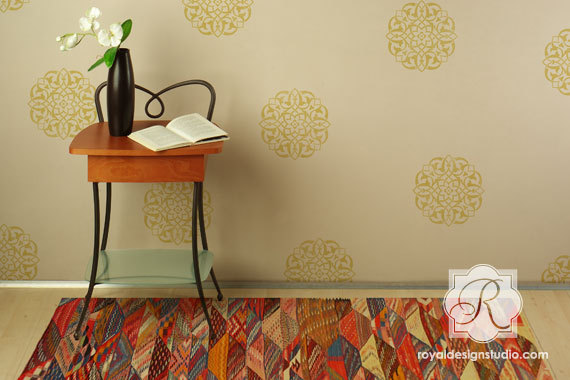 Royal Design Studio also has lace doily medallion stencils that would be great for a project like this.

When choosing a stencil, make sure you check that the diameter of the stencil with work with the size of your tray. My tray is 14″ across and the stencil is just under 10″ so it fit fine. To place your stencil properly, find the middle of your tray and be sure the middle of the stencil design is placed there. Sounds obvious, but I eye-balled it at first and was certain the stencil was centered, but I was wrong! So I found the measuring tape and placed it correctly.

I adhered the stencil to the tray with a stencil adhesive spray. If you worry about your stencils shifting while you paint, use this stuff to make stenciling easier. I also cut the stencil into a circle shape so it would lay flat. The raised edges of the tray kept lifting the stencil up.

I actually did this tray a few times and wasn’t totally happy with the first results. First I used copper acrylic paints and they didn’t contrast enough with the copper spray paint, even when I mixed colors to change the copper acrylic. I realized I really wanted some shiny metallic on the tray and decided to use copper leaf: 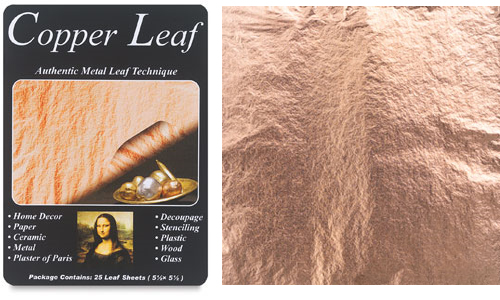 If you do this, apply the leaf adhesive very lightly so it doesn’t bleed under the stencil. Maybe practice on something else first. I used such a light touch, my copper leaf didn’t adhere well enough everywhere to make crisp lines with the stencil. So I call it “ancient copper leaf effect” and I’m okay with it. 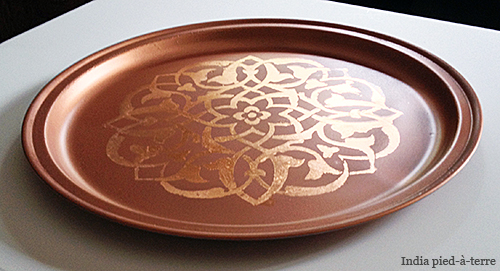 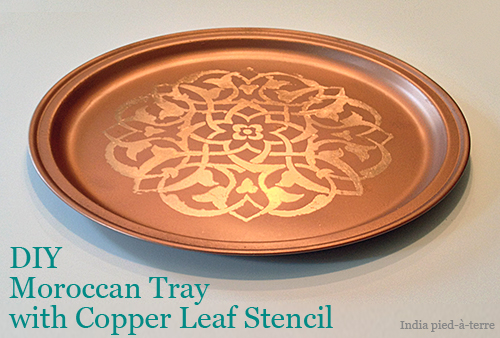 This tray will be going to the India pied-à-terre. There will be two copper “Moroccan” trays on stands as nightstands in the master bedroom. So yes, I will make another tray. But slightly different, so they’re not matchy-matchy. We have a larger 20″ IKEA stainless steel tray we purchased about 15 years ago. It will get a new, more exciting life. 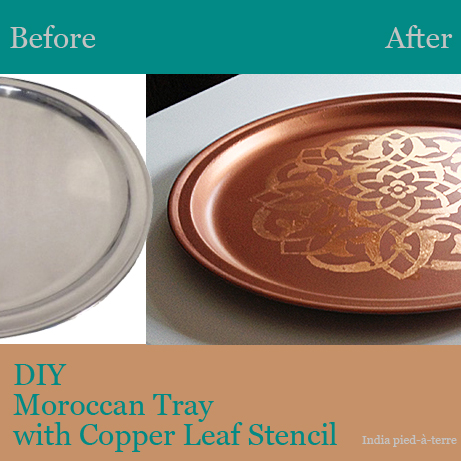 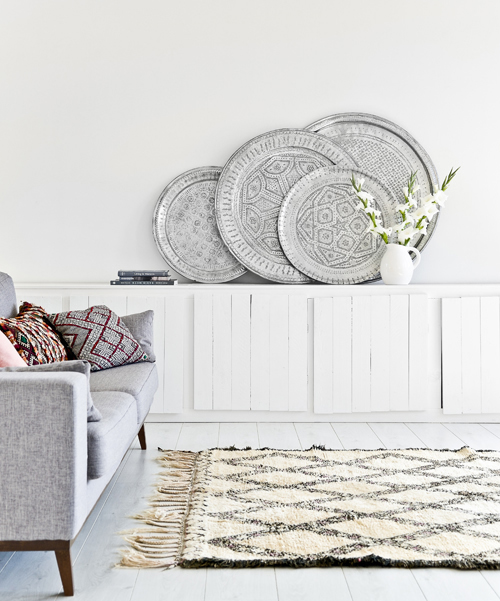 Here’s another tray from One Kings Lane. To get a pattern like this on a tray, you could use an “all over” stencil pattern and cut it in a circle: 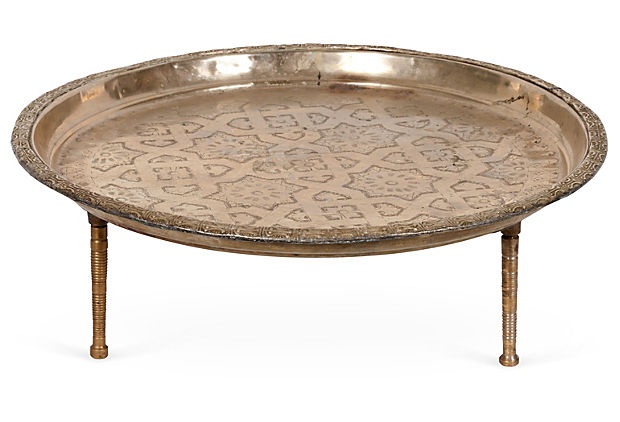 Moroccan trays can be really large, like this one used as a cocktail table, via Lonny: 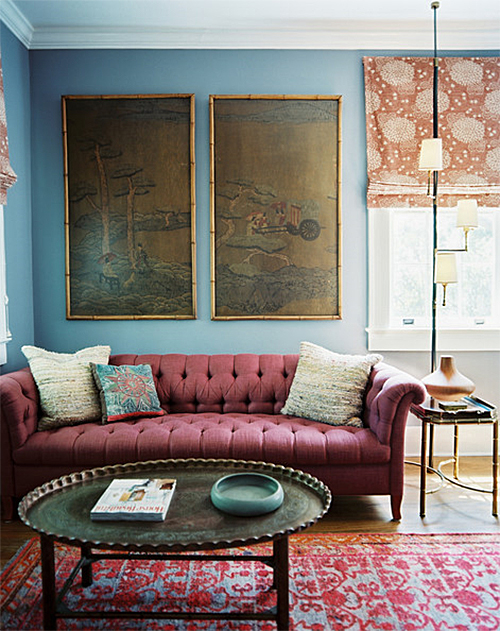 This view, from Houzz, gives you a look at the stand these trays are usually set upon: 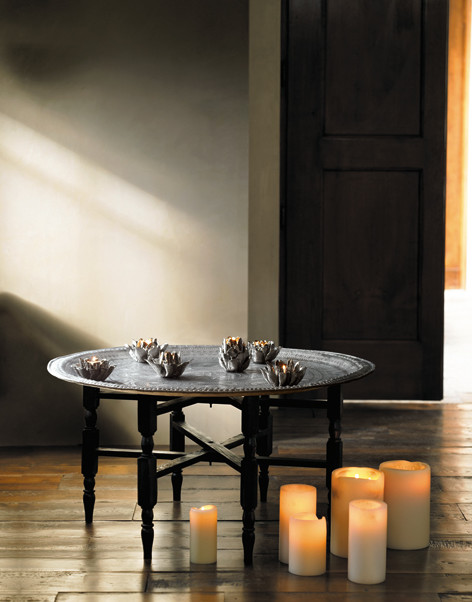 It’s easy to make your own style of Moroccan tray – I hope you try it!

This project shared at:

4 Replies to “DIY: Stencil a Plain Tray to Make an Exotic Moroccan Tray”